Not so long ago the Irish sugar beet industry was booming.

People of my age will most likely remember the countless trucks and trailers on the roads around the country – on their way to sugar factories such as Carlow or Mallow or, if you’re of a certain vintage, even Thurles.

Back then, beet harvesters were dotted around every parish – most commonly in the form of Armer Salmon machines in single, double or even triple-row configurations.

There were also larger, “high-performance” Thyregod machines – typically in double or triple-row versions.

If you were lucky enough, you might possibly even have caught a glimpse of an elusive self-propelled beet harvester. These were rare here in Ireland but some did exist; brand-names such as Agrifac did start to become known.

Unfortunately, the Irish sugar industry closed its doors and the population of such machines has dwindled to a low level.

Now, you can appreciate my excitement when I learned of a sizeable self-propelled beet harvester working in Northern Ireland. While there are still several self-propelled harvesters on the island – mainly lifting fodder beet – I didn’t realise there was a machine of this scale gainfully employed here. 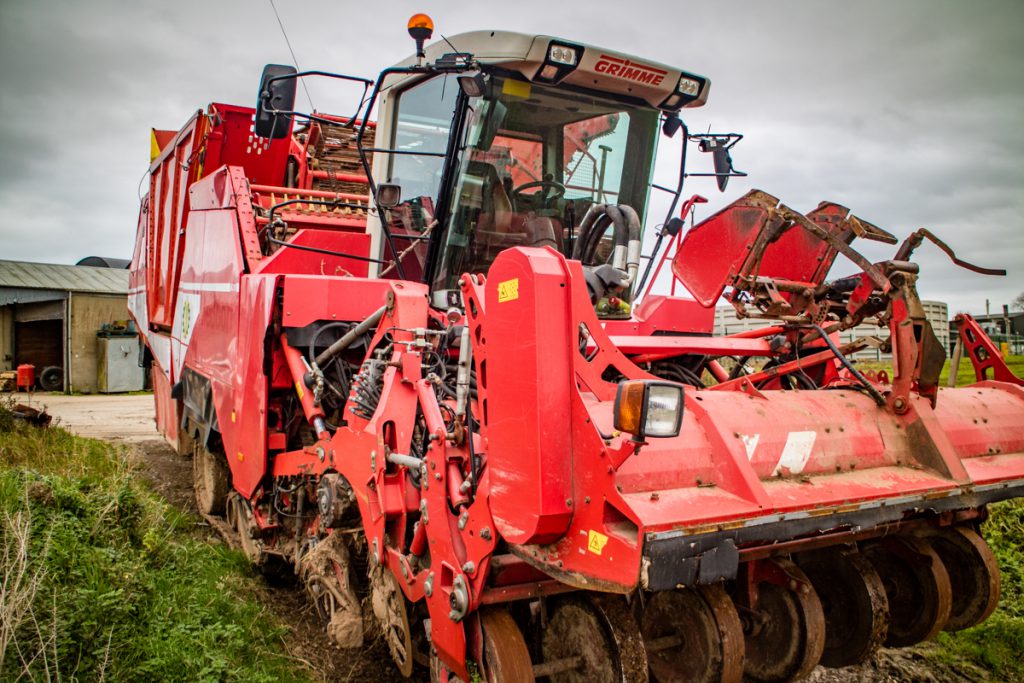 The machine I went to see is the only one of its type in Ireland or Northern Ireland; it’s a Grimme Maxtron 620.

Edenmore Farm Produce – the owner of this machine – is located close to Craigavon, Co. Armagh. The farm enterprise stretches out across more than 1,300ac of land; it is home to a variety of crops, including potatoes, grass, sugar beet and cereals. 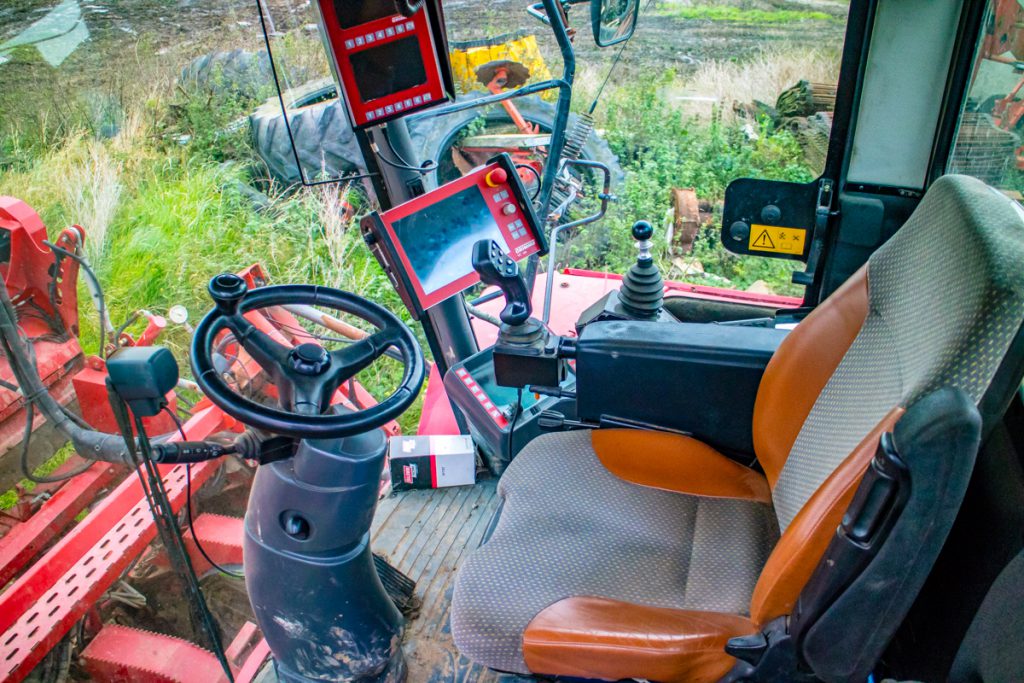 The farm is also home to a new AD (Anaerobic Digestion) plant; it went into operation just 12 months ago – producing 500kW. It is used to power the farm and its cold stores (for potatoes); all remaining power goes into the national electricity grid.

The plant also produces a significant quantity of heat; it is used to dry sawdust – so nothing goes to waste.

Keeping the plant fed is no easy task; it gets through an average of between 26t and 30t every day. This is made up from a combination of grass silage, sugar beet and whole-crop rye. 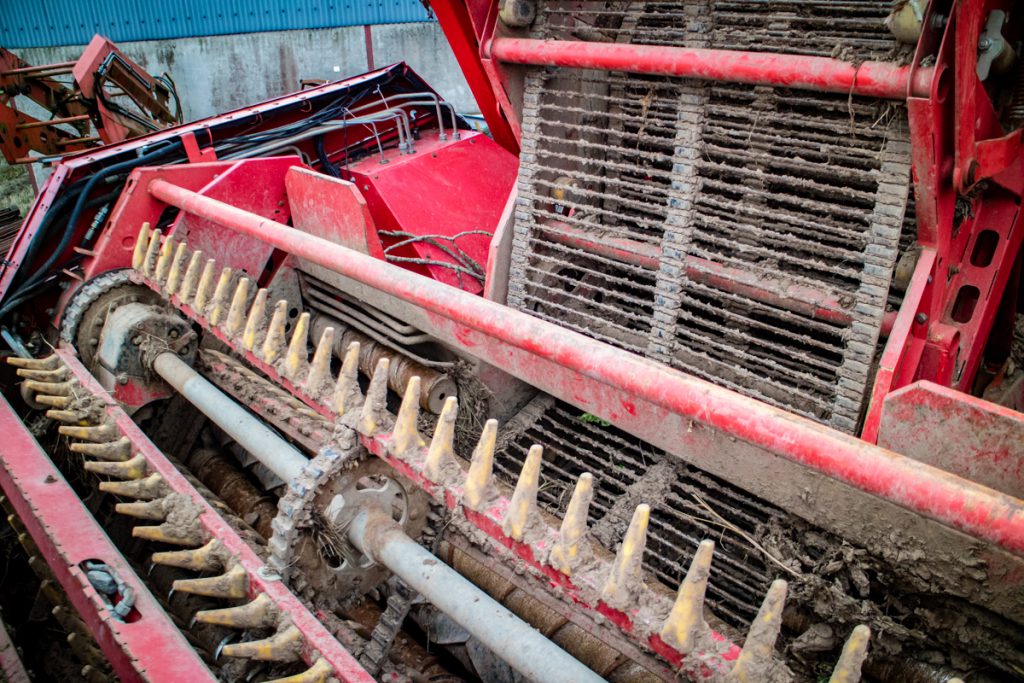 Boss man Dryw Lilburn told me how the farm came to owning such a machine. He explained: “I started pulling beet with a single-row Armer Salmon machine, tackling just 6ac in the first year; the next year I increased it to 70ac and, then, 160ac the following year.

It was at that stage that I needed more productivity. Following a trip to Scotland, I purchased a twin-row Thyregod harvester. It allowed me to increase the amount of beet up to 300ac and, then, 450ac.

“Again, I had to look at the options for harvesting faster and more efficiently, as the Thyregod tied up too many men and machines at any one time – between harvesting and hauling.

So, five years ago, I searched the internet and found a 2005 Grimme Maxtron 620 six-row machine for sale in Holland. I went to look at it, as well as other machines. I eventually settled on the Maxtron, largely due to its front track system – for easier harvesting in wet conditions. 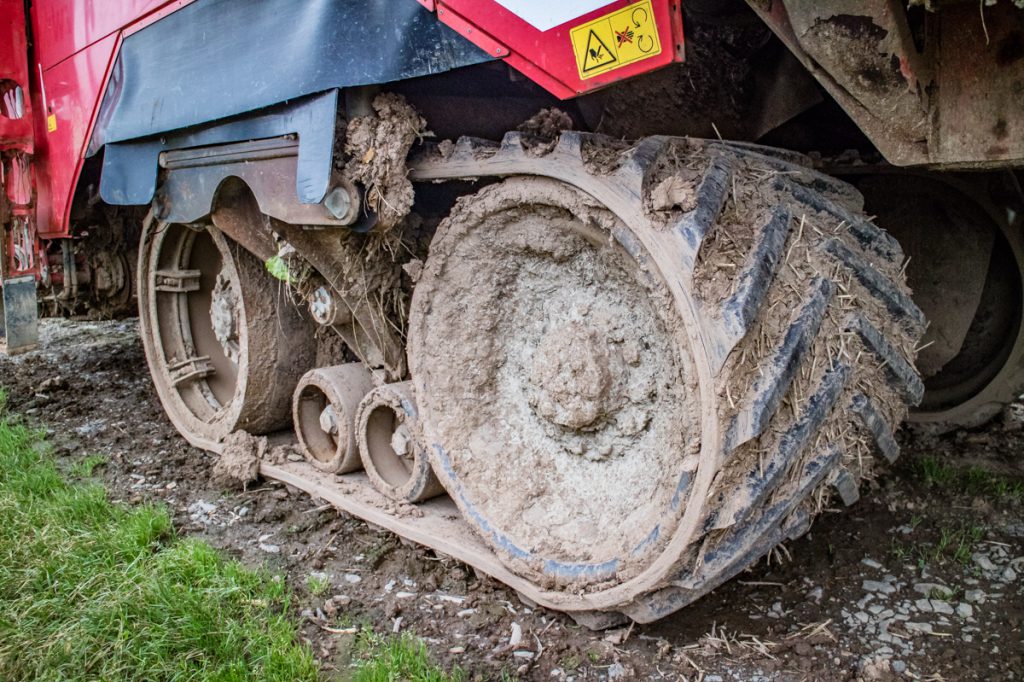 After a long and expensive trip home, I put the Maxtron straight to work and haven’t looked back since. It really is an awesome machine when it comes to getting through the acres; it can easily harvest 30ac a day at 30t/ac.

So let’s take a closer look at this mammoth machine.

The Maxtron is by no means a small unit; it is 40ft long, 11ft wide and 13ft high; it has an unladen weight of 29.5t. The unloading hopper has a capacity of another 22t, bringing the potential total up to 51.5t.

Keeping the machine afloat in what can only be described as “challenging” conditions are a pair of 900mm-wide front tracks, which are 2.99m long. There is also a set of dual 900mm-wide tyres, which are slung underneath the machine in a central, rear position. 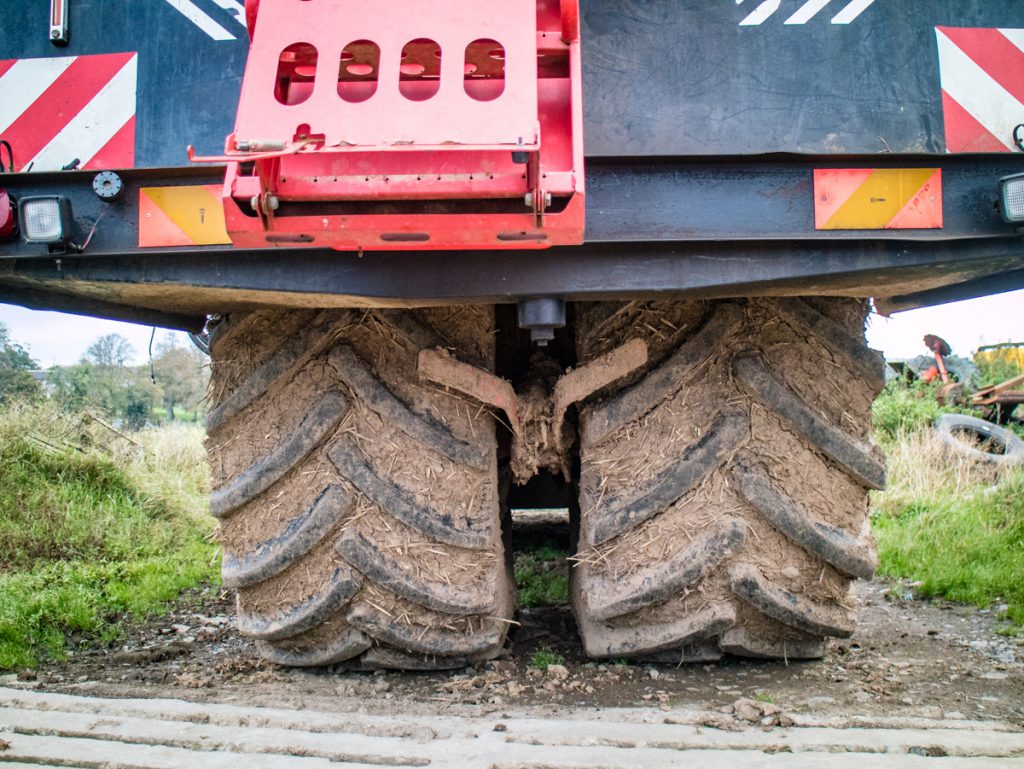 This allows the Maxtron to spread its weight over the entire width of the machine – with no ground trafficked on twice.

Lilburn recalls the stand-out moment for him that proved just how good the machine is at spreading its weight. He said: “One night we were harvesting in the dark and I got out to check something on the harvester.

I climbed down the steps and once my feet touched the ground I immediately sank up to my knees, whereas the Maxtron just sat there as normal; it really has to be seen to be believed.

“Having said that, I have managed to get it stuck on occasion.” 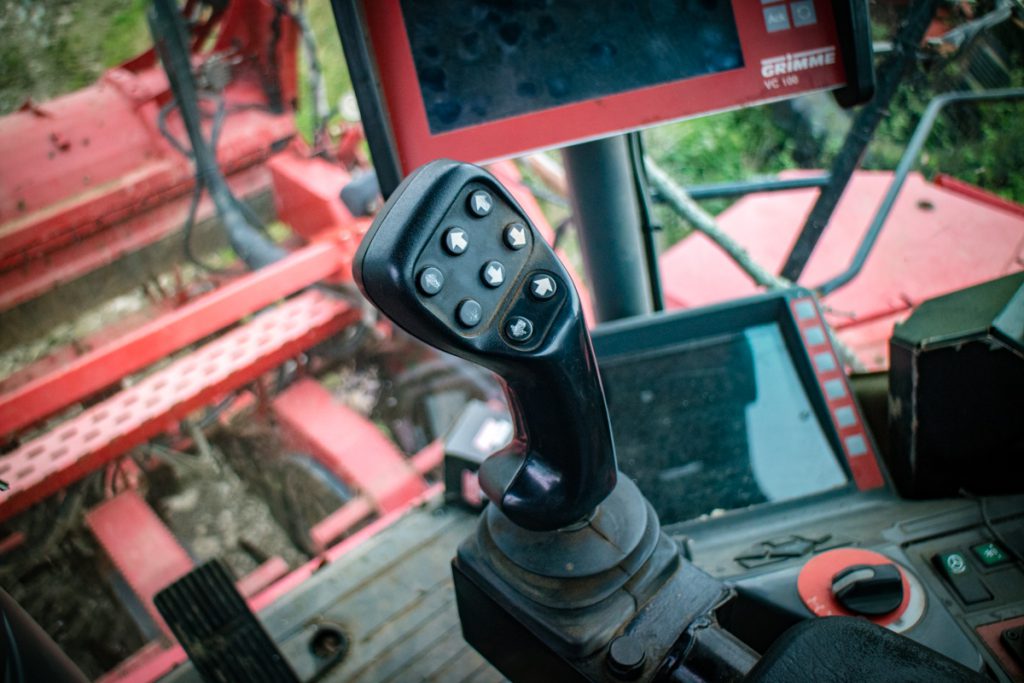 Manoeuvrability is somewhat of a challenge when it comes to big machines, but this is not a major problem for the Maxtron. The rear wheels steer up to 60º. They are further helped by the front tracks, which not only steer by deferring rotational speeds on either side, but also by pivoting up to 4º as well.

Power is courtesy of a 6-cylinder turbocharged Mercedes engine; it churns out an impressive 530hp, which feeds into a hydrostatic drive system to the rear wheels and front tracks. Top travel speed on the road is a not-too-shabby 25kph. 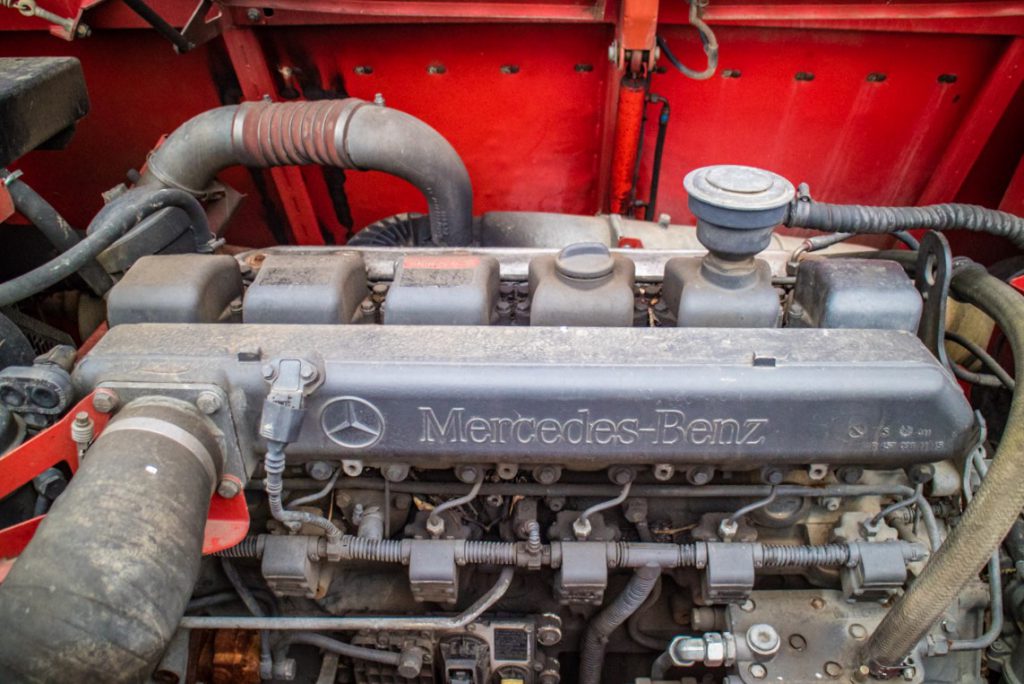 Keeping a monster like this moving in the field takes a team of up to five New Holland T7 tractors – three 270s and two 210s. Extra help is hired in at peak times.

So what about parts and service back-up? Is it a major risk when you own such a unique machine?

“We deal with Grimme Ireland and cannot fault them to be honest,” explained Lilburn.

We run a Tectron potato harvester as well, which shares some of the same parts. 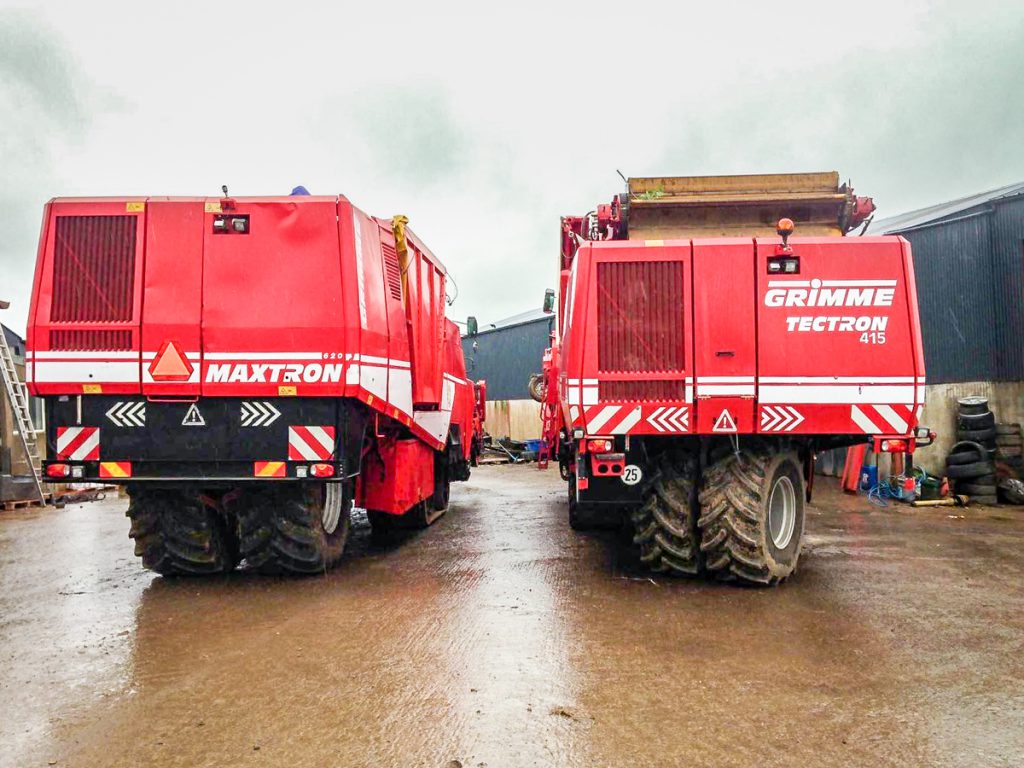 “If I need a special part for the Maxtron, I just call Grimme Ireland and I can get it overnight – direct from the factory in Germany. I really can’t complain about that,” he concluded.