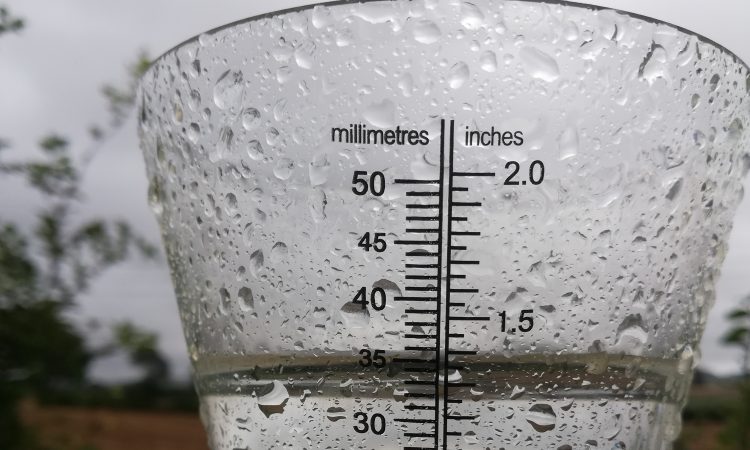 Bobby Miller from Co. Laois sent in this picture of his rain gauge on Saturday as part of the Harvest 2019 Photo Competition

The middle of October is the ideal time for planting winter crops if the weather is right. The weather isn’t playing ball though.

Persistent rain has seen one of the worst seasons in recent years for farmers planting winter cereals.

The majority of winter cereals have still to be planted and while farmers will still be hoping to get as much in as possible it now looks like the area sown to winter crops will be down this season.

While a percentage of crops were sown at the weekend – Saturday brought a window of opportunity – and a dent has been made in acreage between the deluges and showers over the past few weeks, that dent is small; according to reports, it could be estimated at an area of 10-15% sown across the country.

One silver lining to the late sowing is that barley yellow dwarf virus (BYDV) – which was going to be difficult to control this season due to the banning of Redigo Deter – is unlikely to be a big issue on crops this season as crops are sown going in at a colder time.

Weather this week shows no great signs of improvement and many are now losing hope, but optimists will be glad to sow winter barley crops by the end of October; that’s if the opportunity arises to sow after the plough, and if ground conditions allow to plant winter wheat into November.

Winter cereals are among the most profitable crops in this country, generally providing much higher yields than their spring counterparts.

Wet weather is also making things difficult on vegetable growers, while potato digging and beet pulling have become severely disrupted. The last of the maize crops may also be a struggle.