Video: Taking the hardship out of moving calves with the help of a calf transport crate

During a recent visit to a dairy farm in Co. Limerick, AgriLand noticed a very handy transport crate used to move calves around the farm.

The simple but very useful calf transporter is handy during the busy calving season when there’s a flurry of cows calving and the calf shed isn’t located right beside the calving area.

The calf crate was on the farm of Pierce Breen, who AgriLand visited last week to check out his new calf housing facilities.

Also Read: Buildings Focus: Going the extra mile to create an environment for calves to thrive in

Pierce, who only got his new calf house ready before calving began, calves his cows down on the opposite side of the farm to where the calf shed is located, so he needed something that would enable him to move a number of calves at one time from the calving area over to his new shed.

O’Donnell Engineering in Emly, Co. Tipperary, who fitted out the gates, feeding barriers, troughs and stockboard in Pierce’s new calf shed went away and designed and made up this new calf transporter crate for him.

Pierce said that it can fit seven-to-eight calves with ease and that it has been invaluable to him this calving season. The size of the crate is 6ft X 3ft.

Furthermore, the fact that is it fitted with stockboard both on all four sides and the floor makes it easy and quick to wash out.

It has two small access gates on either side to let calves in and out of it. There is a bar at the top of it in order for the tine grab to get under it and pick it up. 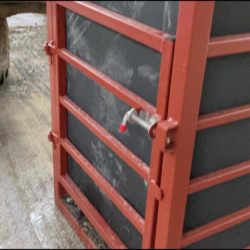 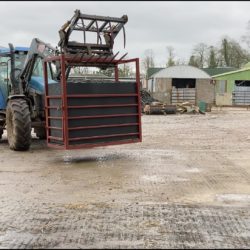 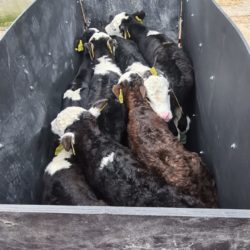