Video: Gates and road submerged in peat after landslide in Galway 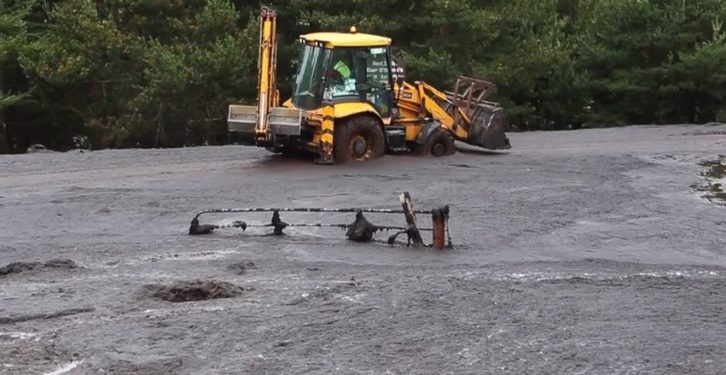 The N59 road in Galway is expected to be re-opened this evening, June 28, following a landslide that occurred there last Thursday.

It is understood that in the region of 4,000t of bog was displaced on the road between Derrylea and Ballynahinch, in Co. Galway.

Following heavy rain last week, the bog collapsed onto the road and crews from Galway County Council  have been working since then to stem the flow of the bog.

It was expected that the road, which had to be closed due to the volumes of peat, would be re-opened on Monday however, this was not to be the case.

Speaking on Galway Bay FM today, Liam Gavin, Director of Services with Galway County Council, said that the council is hoping to be in a position to have the road opened by this evening (Tuesday).

When we cleared the road we had issues relating to the drains under the road that had been completely blocked with peat.

“We had to go and do extra work on that yesterday. We’re just tidying up that this morning. The embankments and the ditches on at the side of it [the road] were destroyed so we had to work to make the road safe again.”

Gavin said that these issues would take today, Tuesday, to solve but that the council is heading towards the end game on re-opening the road now.

The bog which the peat was displaced off is an active bog, in that it has some turf cutting on it, but that coupled with a heavy prolonged period of rain, Gavin said that there was a massive shift in the peat and that’s why it was displaced.

The video below, filmed by Joe O’Shaughnessy for the Connacht Tribune, shows the scale of the damage caused by the landslide on the N59 with the road submerged and large volumes of peat rising up about gateways.