A familiar sight around Bullaun near Loughrea, Co. Galway is Doyle Agri’s Hydro-Trike – a 3-wheeled self-propelled slurry tanker, complete with an 8m-wide injector.

Contractor Seamus Doyle, of Doyle Agri, bought the 380hp, 40kph, hydrostatic machine six years ago. Looking back, how has the machine performed and has he any regrets?

Speaking to Agriland, Doyle explained: “It’s been a good, reliable machine for us. It’s kept busy for much of the year, working on dairy, beef and some sheep farms. The GLAS scheme did boost its workload, due to to the focus on injecting slurry. 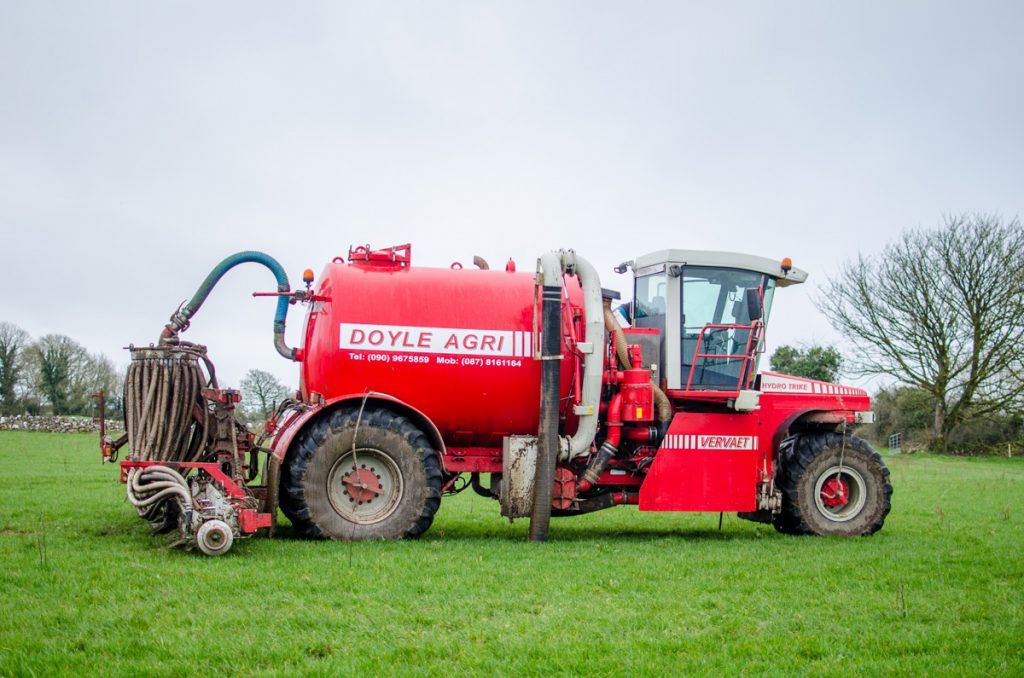 “I imported the machine directly from Vervaet in Holland – the manufacturer. It appealed to me, because the three wide (1050mm) wheels spread the weight evenly; each of the three big tyres runs on a different track.

The fact that it’s a purpose-built, self-propelled machine means that the weight is well distributed, and the wheels directly underneath the tank are powered (driven) – unlike a conventional tractor-drawn tanker. 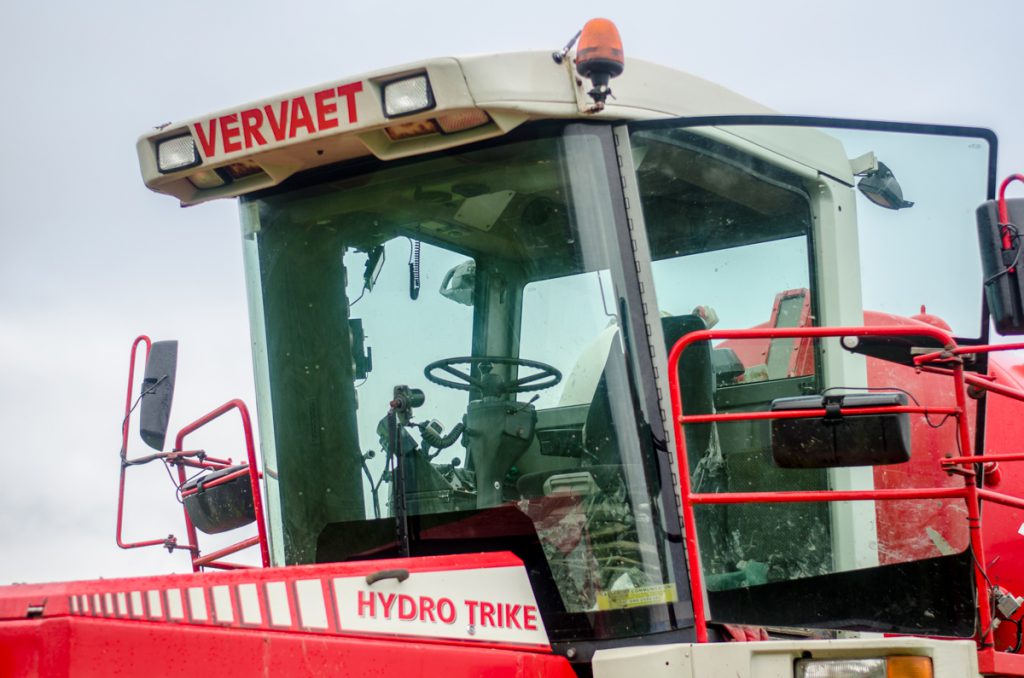 He added: “Despite its size, it’s very manoeuvrable. The single, front wheel can steer 170°, which allows a surprisingly tight turning circle.”

“Sometimes, we use the machine on its own,” explained Doyle, “where it travels back and forth from the yard to the field. On other occasions, we will ferry slurry to the machine – allowing it to stay in the field.

“When it’s working, you can set the machine to put out, say, 2000 gallons/ac. Regardless of whether you speed up or slow down, the machine will automatically adjust slurry throughput to maintain the correct application rate. You can also inflate or deflate the tyres from inside the cab, to match changing ground conditions.” 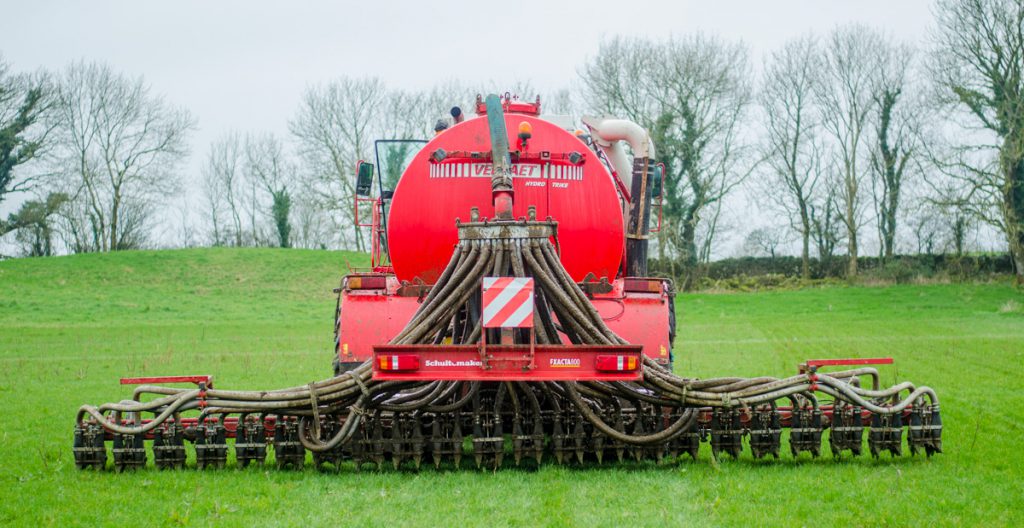 At the rear, the machine is fitted with a Schuitemaker Exacta 800 (8m-wide) shallow-disc injector. Doyle explained: “Because the Hydro-Trike treads lightly, the injector doesn’t need to go very deep (between two and four inches). The Exacta 800 works well; it gets the slurry down to where it’s needed without contaminating the grass.

You get the full benefit of the slurry’s nutrients and you can graze tighter as a result. The injector also has the added benefit of aerating the soil and promoting earth-worm activity.

In fact, Doyle says that livestock can be back out grazing within four or five days of injection, weather permitting. 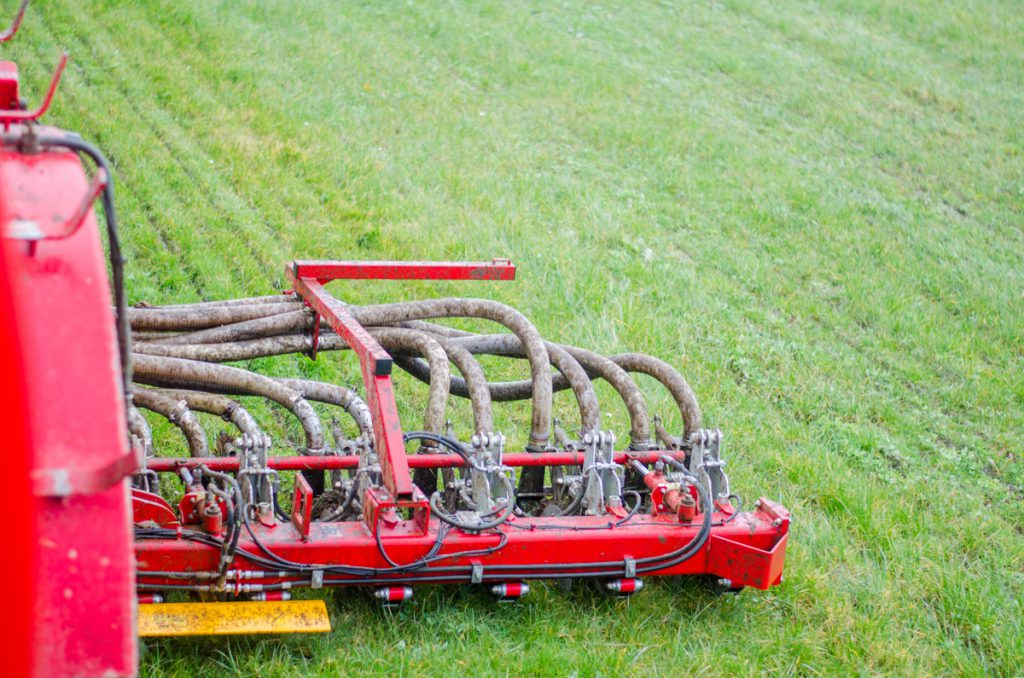 The machine is typically charged out at a rate of €45 per load. That, says Doyle, represents very good value for the farmer, considering the tank’s 3,100-gallon capacity and the benefits of the Exacta injector. The machine is busy now – and will largely stay that way right up until October.

Nowadays, a similar machine from Vervaet would cost in the region of €400,000 including VAT – brand new. Vervaet also offers factory-refurbished units, which are offered with the same complete warranty, for about €300,000 including VAT.

Doyle Agri’s Hydro-Trike is still the only such machine in Ireland, though there are self-propelled slurry tankers from other manufacturers working on the island.

Who or what is Vervaet?

Vervaet, the company that manufactures the Hydro-Trike, was founded in the Netherlands in 1957 by brothers Frans and Richard in a barn outside their father’s house. They started repairing machinery but quickly grew to form a fully-fledged dealership.

By 1960, they had built a new garage. During the 1970s, the firm developed its first sugar beet harvester. It caused quite a stir at the time.

The second generation of the Vervaet family – Edwin and Robin – both came into the company in 1989. With Frans, they developed a self-propelled machine for injecting slurry; the Hydro Trike was born.

The innovative machine has since become very popular in Holland; it has been the market leader there since 1992 – a year in which 15 Hydro-Trikes and 15 sugar beet harvesters were built and sold.

By 2000, production had ramped up to 25 Hydro-Trikes and 30 harvesters each year – many of which are exported. The business is still going strong to this day.