US milk production up 1.4% in May to 8bn litres

According to analysis by DairyCo, production in California increased 1.0% compared to April while Wisconsin stayed stable. This, plus some strong increases in other producing regions and increasing cow numbers, has meant the US is now producing around 2m litres (1.3%) more compared to the first two months of the 2013/14 milk year.

DairyCo notes that although the feed to milk price ratio (FMR) in the US has been falling over the past few months, milk prices have remained relatively firm due to steady increase in milk production, firm domestic demand and record levels of exports.

It says this has the potential to intensify farmers to push for additional litres; however, as the FMR increased over 2013/14, farmers opted to pay off debt rather than chase extra litres.

However DairyCo highlights that the longer a favourable FMR continues and if crop forecasts are recognised, the incentive for US farmers to boost milk production increases. 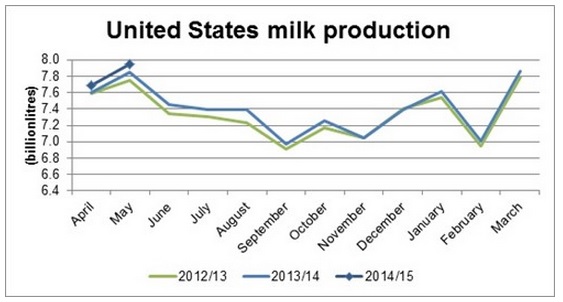 Calls for a Food Vision Tillage Group to be established

Orientation and maintenance of solar panels

2022 factory cattle supply set to be highest in 23 years