Unsettled weather to continue as 75,000 still without power 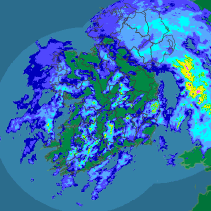 The unsettled weather is set to continue this weekend as 75,000 people, mainly in the south of Ireland in the counties of Cork, Wexford, Kerry, Tipperary, Clare and Limerick, remain without electricity. In addition, the water levels of the Rivers Liffey, Lee and Shannon are on high alert.

In a briefing of the National Emergency Co-ordination Group (NECG) on severe weather this afternoon in Dublin, the ongoing impact of storms hitting Ireland was discussed.

“Today we face a range of threats from the weather, which includes more wind, gale force but not as bad as Wednesday’s storm,” chairman Sean Hogan outlined.

“Heavy rain is coming up across the southern half of the county, which is already saturated and this poses some threat. We are back to tidal flooding conditions in Cork in particular.

“While none of today’s threats are extreme,” he stressed, “They come at a time where our response agencies are attempting to clear up and restore services after Wednesday’s extreme storm. And conditions today are very difficult and will hamper those efforts.”

An official from ESB said the counties of Cork, Kerry, Limerick, Clare, Tipperary and Wexford were the worst affected in terms of loss of electricity power supply.

“Today is a particularly challenging day for staff working in these conditions and the possibility that we are going to sustain more damage during the course of the day. It’s a very difficult situation for us at the moment,” he added.

The ESB had more than 2,000 staff and contractors on the ground from early this morning to restore power to the 75,000 customers affected. Since Wednesday afternoon power has been restored to more than 185,000 customers, out of a total of 260,000 without supply.

The NECG is advising people without electricity to keep warm and take care with alternative forms of energy, to check-in on vulnerable neighbours and people with specific medical concerns are advised to contact their local practitioner.

“Work is ongoing to stabilise situations where damage has been caused to buildings, the main roads which were blocked by trees by and large have been cleared and rail has also been restored,” the NECG chairman outlined.

“Assessments are now being made where trees have been weaken and may need to be taken down in the interest of public safety,” he added.

The loss of power remains the NECG’s biggest issue and concern. “Significant progress has been made unfortunately conditions have not been helpful,” Hogan said.

According to Met Eireann, the period of unsettled weather is set to continue into the weekend and next week.

“We are still in a period of very unsettled weather,” outlined Ger Fleming of Met Eireann at the NECG briefing. “We have had obviously quite a bit of wind and rain today, nothing like the rate of wind of Wednesday, but still enough to cause further threat given that trees have been weakened and structures have been weakened by the storm on Wednesday.”

He added: “Beyond that the weather will stay very unsettled. We will have more rain in the later half of Sunday and beyond that into next week, basically every second day, so there is not let up. The forecast will be windy heavy wet weather.  Of particular concern is that river levels are quite high, given rainfall that we have and we forecast.”

An official from the Office of Public Works noted that river levels remain on high alert, in particular the Rivers Lee, Liffey and Shannon which he said are being constantly monitored. “We ask people to remain vigilant,” he added.

IFA president Eddie Downey said the saturated land means that all livestock have to be housed for some time yet and there is an inevitable increase in workload and costs as a result.

Downey said a strong community spirit exists in rural Ireland and he encouraged farm families to look out for each other. “I would appeal to them to check in on elderly neighbours in particular.”

The ESB has agreed to facilitate the transportation of generators and other equipment to farmers who are without electricity, especially for farmers who cannot milk cows or provide water for their animals, the IFA added.