UK prime cattle prices have dropped 10p/kg over the last four weeks, according to the AHDB, on the back of high kill numbers.

Beef prices continued to fall last week, it shows, with the average British cattle price back 2p/kg on the week earlier.

According to the AHDB, prices continued to fall last week, as the number of cattle coming forward for slaughter continue to rise, compared to the disrupted weeks over Easter.

The AHDB estimates that cattle numbers have jumped by 2,800 head last week, compared to the week earlier. And, as a result last week’s kill stood at the highest level for some weeks.

The AHDB also report that cattle meeting the UK supermarket specifications continue to meet the best demand, as chill rooms are not as full as they were a short time ago.

However, despite this, cattle which fall out side of the supermarkets requirements are starting to appear on waiting lists in some areas.

Last November, Dunbia introduced a new range of specifications to meet the demands of its retail customers.

The specifications limited the number of cattle movements to four, with cattle that exceed this requirement penalised by 15p/kg (18.6c/kg).

It also reduced the maximum weight carcass weight limit from 415kg to 400kg.

Also in November 2015, ABP – one of the largest beef processors in the UK introduced weight and age limits, with cattle over 36 months of age paid at the same rate as cull cows.

The Larry Goodman-owned company also started to cut over weight cattle, with the prices paid for carcasses over 450kg cut by 12p/kg (14.8c/kg). 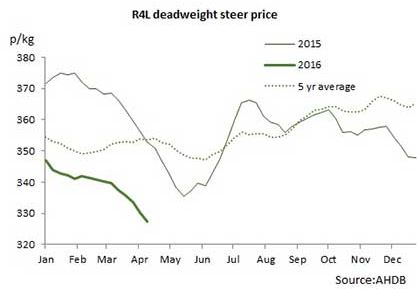 However, despite the ease in prime cattle prices, the AHDB reports that the cow trade remained stable last week. Prices remained at similar levels to last week at 194.4p/kg.

The increase in dairy cow numbers had little impact on the cow trade in the UK last week, according to the AHDB.

This is because Sterling is continuing to weaken in comparison to the euro, which is help the UK’s export trade.