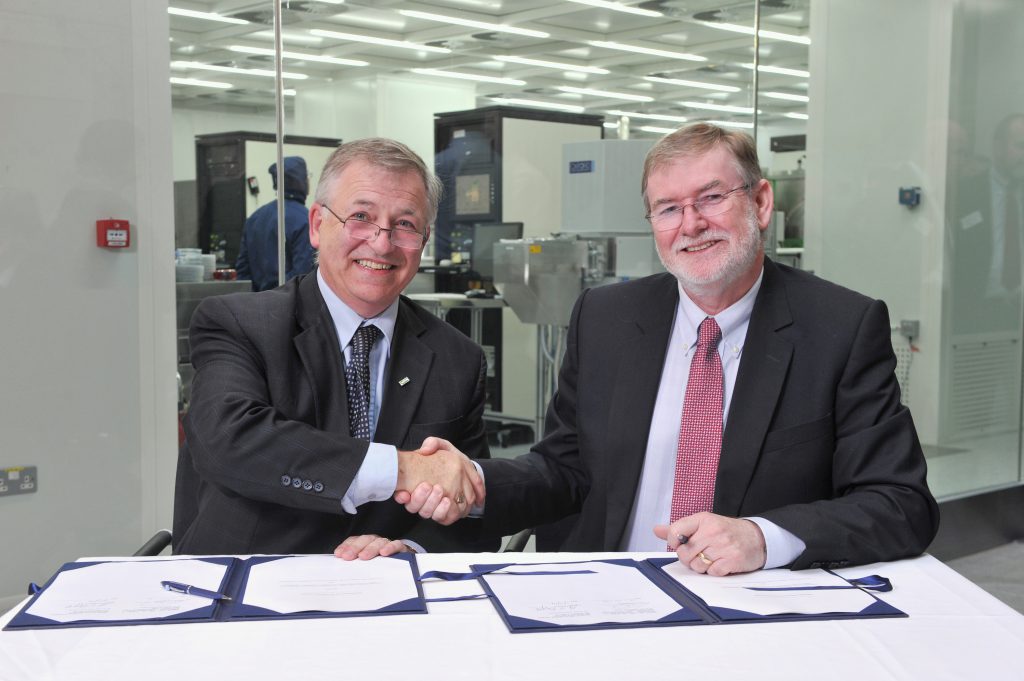 Tyndall National Institute and Teagasc have today announced the signing of an MOU, forming a partnership to create smart agriculture technologies, which will increase Irish competitiveness in the agri-food sector. Through the partnership the two organisations will work together to secure maximum EU Horizon 2020 funding and create up to 10 new graduate research positions.

Speaking at today’s launch event in Cork, Minister for Agriculture, Food and the Marine Simon Coveney said; “I am delighted to witness the signing of today’s MOU between two of our nation’s great research assets, Teagasc and Tyndall. The ability to innovate and evolve our agricultural practices has been a key aspect to the emergence of agri-food as one of the cornerstones of our national economic recovery. The research being partnered today by these two bodies has the capacity to enhance Ireland’s reputation as a leading agricultural country”.

Dr Kieran Drain, CEO Tyndall National Institute, added; “This partnership represents a key milestone for Tyndall in the pursuit of our stated goals, laid out in our five-year business plan. Through this formal partnership with Teagasc, we will be in a position to converge our unique set of skills and drive the kind of national economic impact that we believe the scientific community can contribute to the food and agri sectors in Ireland. Not only will this partnership progress the science of agriculture, it will also aim to produce new technologies that can create greater efficiencies and develop new products and services “.

Professor Gerry Boyle of Teagasc, said “The requirement for greater agricultural productivity and food production while reducing both greenhouse gas emissions and nutrient leaching is a very real and tangible problem for the 21st century that must be resolved. Combining state of the art ICT and sensor technologies with on-going improvements to plant and animal breeding, grassland management, and animal husbandry practices places Ireland at the forefront to meet this challenge. The MOU between Teagasc and Tyndall formalises existing collaborations and will act as a springboard for the development of new collaborations between the scientists in these two institutes. The era of smart agriculture is upon us, and this partnership has the potential to make Ireland a leader in the field of smart agriculture”.

This new strategic partnership will foster and encourage researchers in both organisations to actively explore synergistic and complimentary research opportunities, which will result in an increase in Ireland’s European and global competitiveness. The combined expertise at Tyndall and Teagasc will enable the development of new technologies, products and services in the agri-food sector.

The partnership will deliver economic impact by developing new ICT and production approaches that can be mapped onto the diverse requirements of agriculture to:

The MOU will provide the foundation for a series of projects aimed at making agriculture smarter and more efficient and it formalises an already fruitful partnership with a number of beneficial projects to the Irish agricultural sector currently in progress. One such project is called IBR-Nano, which enables the early detection of the harmful, and highly virulent, Infectious Bovine Rhinotracheitis (IBR) herpes virus, which has a range of symptoms including respiratory infections, drop in milk production and foetal abnormalities. This herpes virus can affect an entire herd even though some may be carrying IBR latently with no symptoms, only to infect further members of the herd at a later stage. Novel Nanosensor technology will enable rapid detection of the infected members of a herd, allowing farmers to remove or treat the affected cattle, limiting the spread and minimising risk to the herd. Current laboratory diagnosis techniques can require up to 7-days to get a result. The rapid detection abilities of IBR Nano will reduce the need to widely administer antibiotics, cutting the costs to farmers and alleviate animal suffering. In recent years, the application of biosensors to diagnostics has experienced substantial growth with the global point of care biosensor market estimated to exceed $6.496 billion by 2016

The MOU Another project “flukeless” (funded by the DAFM) is developing new biosensor technologies and coupling these with geographical information systems to determine when and where outbreaks of liver fluke are expected in order to allow farmers to dose their herds in sufficient time.