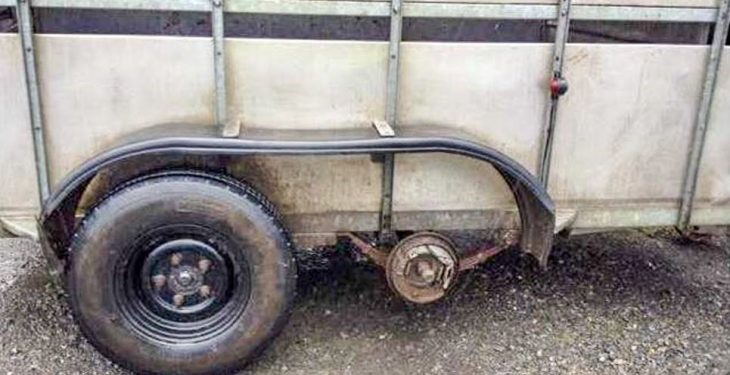 The Garda Traffic Corps in Co. Cavan pulled over a driver towing a trailer that was missing two wheels at a checkpoint this morning.

The checkpoint was a multi-agency venture between the Gardai, the Road Safety Authority and waste management officials.

Approximately 12ft long, the livestock trailer was being towed behind a 4X4 vehicle.

It is clear from the pictures that two wheels are missing from the trailer – one from either side. It is unknown, as yet, if the driver was fined or whether any other action has been taken against them.

Theme of tractors and trailers with missing wheels…

The trailer stopped this morning seemed to be empty when pictured at the checkpoint, but one farmer was stopped carrying a full load of sheep when his trailer only had three wheels in Co. Wicklow earlier this year.

The driver was fined for using the three-wheeled trailer with 30 ewes on board in mid-February. The driver was ‘left sheepish’; the Gardai declared the ‘wool wouldn’t be pulled over their eyes’.

The trailer was moved into a nearby field, according to the Gardai.

‘Driver left sheepish’ Wicklow Gardaí stop driver towing trailer on 3 wheels with 30 ewes on board. You won’t pull the wool over our eyes! pic.twitter.com/LToLzHKgO1

Meanwhile, the three-wheeled vehicle theme continued elsewhere in Feburary; Gardai in the Tipperary Traffic Corp seized a tractor which was being driven – while missing one of its front wheels.

The fourth wheel was tied to the back of a service trailer that it was towing.

The Gardai tweeted photos of the seized tractor on its Traffic Twitter page in mid-February.