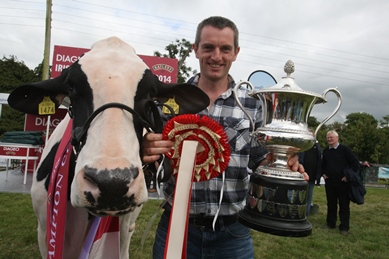 Fifteen thousand people enjoyed the sights and sounds of this year’s Virginia Show. The highlight of the event was the crowning of the 2014 Diageo Baileys Irish Champion Cow of the Year, which is hosted in association Glanbia Ingredients Ireland.

The winning cow, Dalevalley OTI J Lulu, was bred and exhibited by Eugene and Sean Murphy, from Co Cork. No stranger to the Virginia show ring, this was her second Bailey’s Championship in four year. On her other two occasions at the Co Cavan venue, she was awarded  the Champion Reserve and Honourable Mention accolades.

“She has tremendous strength and dairy character,” he told Agriland.

“And the fact that she has given birth to 9 calves over the past seven years is further testimony to her unique qualities as an elite dairy cow.

“In fact, the final line up of cows speaks volumes for the commitment made by Irish dairy cattle breeders over recent years. The Baileys’ Championship is now widely recognised as one of Europe’s premier dairy classes.”

The Reserve Baileys’ Championship was awarded to the Boyd family from Co Monaghan with their eye catching cow Glaslough Miss Petra while Cyril and John Dowling from Co Dublin took the Honouable Mention accolade with Pavime Friskey.

Virginia Show is traditionally used as an opportunity for government ministers to comment on the state of the farming industry. Courtesy of her presentation at the Baileys’ reception Junior Minister Heather Humphreys confirmed the scale of the problems that could be created for the Irish farming and food industry in the wake of the EU food import ban introduced by Russia a fortnight ago.

“We have made it quite clear to Brussels that steps must be taken to support the food sectors with immediate effect.”

Dairy trade representatives attending today’s show are interpreting this comment as constituting a request for the introduction of Export Refunds.

Regarding the problems facing the livestock sector Heather Humphreys said that every effort is being made to find new markets for Irish beef.

“The Beef Forum will also reconvene over the coming weeks,” she stressed

“In addition Bord Bía has been allocated a budget of half a million Euros to promote Irish beef in the UK over the coming autumn months.”

“I addition, significant funds will be made available courtesy of the new Rural Development programme to support the needs of the Irish beef sector.”