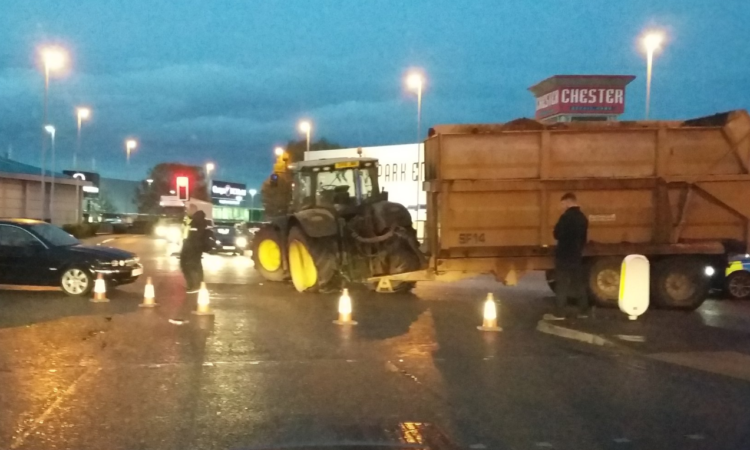 A tractor pulling a trailer suffered a tyre blow-out, causing it to jack-knife across a busy junction in the UK earlier today (Wednesday, November 7).

Taking place in Chester, England, local police quickly attended the scene, closing off the crossroads in question until assistance could arrive.

In images taken by local bystanders, the tractor’s back left tyre has almost completely come away from the wheel, indicating the severity of the tyre damage.

The crossroads being partially blocked led to slow traffic and delays for motorists in the region.

The AA issued a brief update on the matter, saying: “Sealand Road is partially blocked and slow traffic due to an accident; a tractor that had burst its tyre involved on Sealand Road both ways at Greyhound Retail Park / Bumpers Lane.

“This has occurred on the junction,” the update noted.

A large-scale fire that took three days for firefighters to extinguish completely on a farm in the UK is thought to have been started deliberately.

Staffordshire Fire and Rescue Service has said the cause of the fire – which broke out on a farm in Cheddleton, England – is believed to be deliberate.

The service was called to Basford Bridge Farm at 8:32pm on Tuesday, October 30, after reports of an extensive fire in one of the agricultural buildings.

At the height of the incident eight crews were in attendance and had to split the area into three sectors in order to tackle the fire, which involved a 40mx30m building full of hay.

They used several main jets and a high-volume pump to put out the flames whilst machinery was used to remove some of the straw.

The firefighters, with the help of the occupier, continued to remove the hay and damp down hot spots through to Thursday, November 1.

Following a fire investigation the incident is being treated as deliberate and the service is liaising with Staffordshire Police.

Appeal for information after 2 quads stolen in Co. Fermanagh