Diseases and ailments of the digestive tract have been identified in 28% of cases as the cause of death in sheep, while Toxoplasmosis accounts for 21% of abortions, according to the Department of Agriculture.

The Department of Agriculture’s Quarterly Surveillance Report shows that approximately 28% of the 300 post mortems carried out on sheep indicated that death occurred as a result of diseases of the digestive tract (alimentary tract diseases).

Of this 28%, 42% of deaths occurred as a result of intestinal inflammation and scour (enteritis), while parasitic infections were identified for 17% of these these deaths.

The Department’s figures say that intestinal torsion and twisting was identified for 24% of all digestive tract deaths.

Urogenital diseases accounted for a further 13% of deaths in the 300 sheep, this is a similar figure for the deaths as a result of systemic disease, it says.

Clostridial disease was identified as the cause of 5% of these deaths, with pulpy kidney being the most common clostridial reason for death. 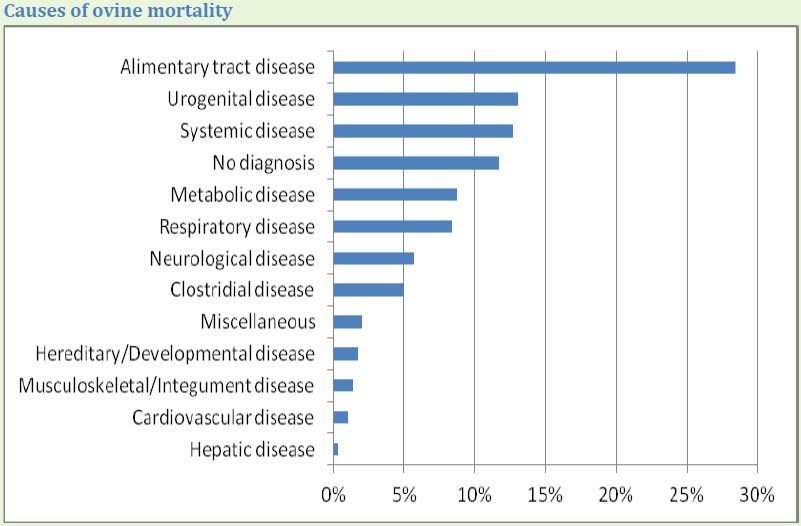 Intestinal inflammation and scour (enteritis) has been identified as the number one causative factor for sheep deaths, which was established through post mortem and accounted for 37 out of 300 deaths, it says.

Abortion was identified as the reason for death in 28 sheep. There was no clear cause in 34% of cases, however, Toxoplasma gondii and Chlamydia spp. were present in approximately 37% of cases (21% and 16% respectively).

Pneumonia accounted for 20 of the 300 sheep deaths, while poisoning as a result of ingesting toxic substances killed 10.

Post mortem examination highlighted that 15 sheep died as a result of clostridial diseases, with pulpy kidney cited as the reason for death in 70% of cases.