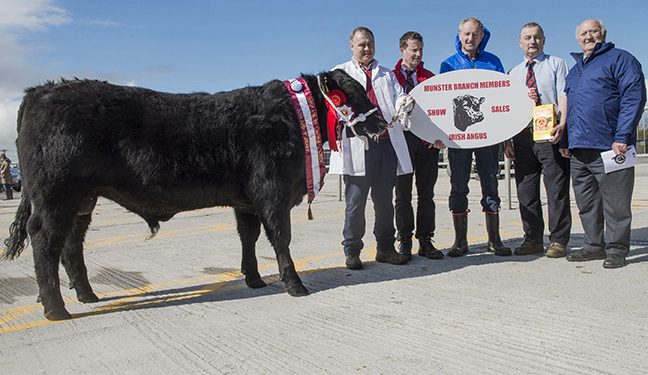 On the day, 36 bulls and two heifers passed through the ring. The bulls on offer sold to a clearance rate of 79%, with 28 bulls finding new homes.

In the pre-sale show, John Farrell of the Dillon Angus herd in Co. Roscommon and President of the Irish Angus Society selected Gurtavoher Napoleon as the Show Champion.

The bull bred by John Barlow, Aherlow, is a son of his stock bull Castleslough Midnight Brandy and sold for €3,200.

The Reserve Champion, Cahirmee Major, bred by Richard Smith of Donerail went unsold after failing to meet his reserve.

Next highest was Mercury Narcos, a bull bred by John Murphy, Banteer, Co. Cork. The Friarstown Paddy Perhore son broke the €3,000 barrier and sold for €3,050.

Another bull, Brookfield Max, exhibited by Clive Jennings sold for €3,000.

Two bulls went for €2,800. These were Killerarnan Miltown, sold by Martin Hehir, and Kildromin N576 exhibited by Margaret Hayes. Another four bulls sold for €2,750 each.

Both of the heifers on offer were the property of Denis Twomey, Causeway. A top price of €2,700 was paid for the Champion Tubridmore Polly. The other heifer, Tubridmore Leanie, made €2,600.

The Munster branch of the Irish Angus Cattle Society will hold its next sale on April 21 in Castleisland Mart and April 29 in Kilmallock.