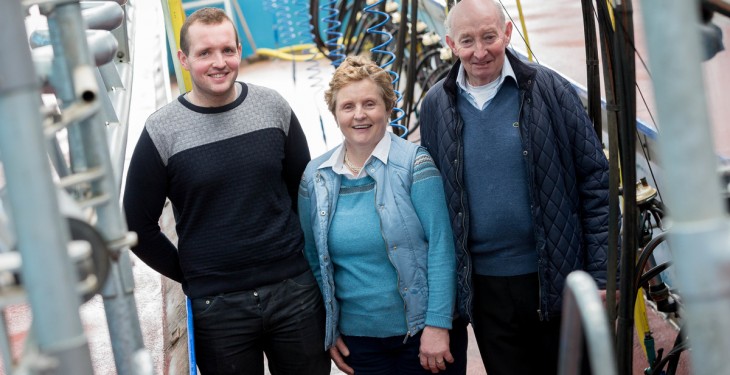 The most recent national winners of the NDC and Kerrygold Quality Milk Awards will host a Farm Walk organised by Teagasc on the afternoon of Thursday April 23, 2015, as part of National Dairy Week.

The announcement was made as co-ops and dairies throughout the Republic of Ireland are being invited to select and nominate their top dairy farmers for the 2015 NDC and Kerrygold Quality Milk Awards, organised jointly by the National Dairy Council and Irish Dairy Board.

Eddie and Ann Dwan from Bohernamona, Thurles, Co. Tipperary are farming with their son Thomas, the third youngest of the family and fourth generation on the farm.

They milk 105 cows on their 75ha farm and supply all of their milk to Centenary Thurles Co-op. The Dwans received the most recent NDC and Kerrygold Quality Milk Award, known as the ‘Sam Maguire of Farming,’ at a national ceremony in Dublin last October.

In a 2015 survey of dairy co-ops there was widespread agreement that the NDC and Kerrygold Quality Milk Awards help to show consumers the high quality standards on Irish dairy farms. However co-ops also believe that the awards help to raise awareness amongst dairy farmers about best practices in relation to quality standards, environment, animal welfare and sustainability.

Encouraging dairy co-ops to nominate their top suppliers for this year’s national awards, Mr. Cahill said that role models such as the Dwan farm help to showcase excellence.

Information about the Dwan farm and nominations forms for the NDC and Kerrygold Quality Milk Awards including the entry criteria and rules are available at www.qualitymilkawards.ie.

The minimum qualifying standard for entry is TBC of 15,000 or less/ml average per month; and average SCC of 200,000 or less/ml with no count greater than 400,000 ml in any given month of the year in question.

Nominations should be submitted from co-ops and co-op farm services managers based on the written nomination form, prepared in consultation with the farmer. The closing date is 15th May, 2015.