There is another unsettled weekend in store with rain and wind while next week there will be more rain, Met Eireann has said.

Friday will be a cold and very blustery day; whilst there will be sunny intervals showers occurring too, with the risk of thunder to begin, it said.

Some of the showers will be heavy and of hail while Met Eireann has said that later in the evening, showers will become confined to western and northern counties.

Strong and gusty, westerly winds will continue throughout the day, with temperatures falling back on recent days; highest temperatures 7 to 10 degrees Celsius, best values for southern coasts, it said.

Tonight (Friday) it will remain blustery in the evening but with showers dying out, it said, mainly becoming confined to Atlantic coasts.

Overnight the winds will ease, backing southwesterly, but rain will begin to push up across the country from the southwest later, according to Met Eireann.

It will be rather cold tonight (Friday), with lowest temperatures of 3 to 6 degrees Celsius, it said.

Looking to tomorrow (Saturday) Met Eireann has said it will be wet and breezy with some heavy falls of rain through the day, leading to local spot flooding.

Later in the day, the rain will begin to ease across the southern half of the country while it will be humid with low cloud and mist, and highest temperatures of 13 to 15 degrees Celsius, it said. 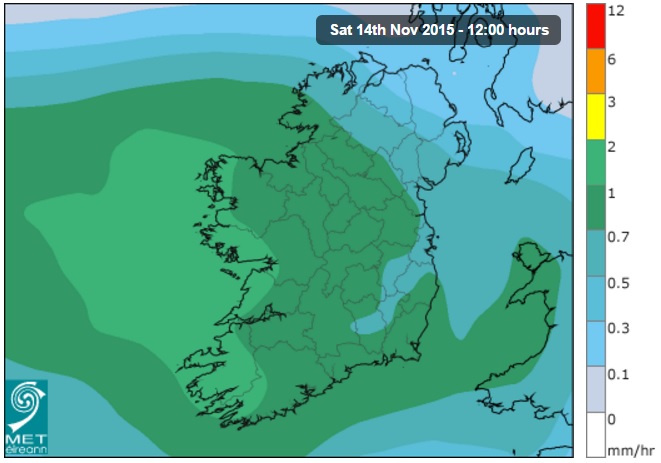 Expected rainfall levels across the country on Saturday at noon

Saturday night will be breezy with further outbreaks of rain and most of the rainfall will occur during the early night, according to Met Eireann.

Advertisement
The rainfall will be mainly confined to west and northwest coastal counties later, it said with some heavy persistent falls in these regions leading to spot flooding.

According to Met Eireann, Sunday will be mild, cloudy and breezy with scattered outbreaks of rain – heaviest across Atlantic counties, driest across the eastern half of the country, where rainfall will be more scattered.

There will be highest temperatures of 13 to 15 degrees Celsius, with mostly fresh southwest winds, strongest near Atlantic coasts later in the day, it said.

Looking to next week, Met Eireann has said that Monday will be dry for much of the day with sunny spells and mostly moderate southwest winds.

However, it said that a spell of wet weather is likely to move into the west and south later in the afternoon, extending to other areas during the evening and night-time.

Temperatures falling back on Monday, it said, with highest temperatures of 10 to 14 degrees Celsius, best values in the south and east.

Rain is likely to push up across the southern half of the country on Tuesday, Met Eireann has said, other areas are likely to hold dry.

It will be cool, with highest temperatures generally only reaching 7 to 11 degrees Celsius, a little milder over east Munster and Leinster with values in the double figures here, it said.

It will be milder on Wednesday cooler thereafter, with Met Eireann promising changeable weather.