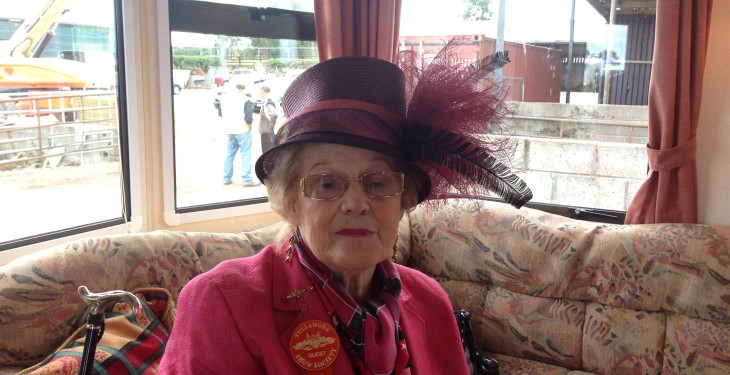 Throughout today’s Tullamore Show the voice of the elegant and witty Carrie Acheson will be heard. Carrie has manned the loudspeaker of every prolific agricultural show that has taken place around Ireland.

This year at the Tullamore Show she is as  enthusiastic as ever, ensuring there is a humorous word for any one who steps into her palace/caravan at the hub of the show. She dislikes the term ‘lost and found’ claiming her job is to reunite people. “Nobody is ever lost at the show they’ve just found themselves a bit confused or in an unknown location’ she said.

Carrie was involved in farm machinery and was elected as Chairperson for  South Tipperary Agri Committee at a young age. It was from here that she became involved in the committee for the revamped Ploughing Championships in 1977. She took the microphone at the event and hasn’t put it down since. Remarkably she doesn’t eat all day but keeps her energy up with cups of tea, this is despite various members of the public from the gardai to curious children  dropping into her with chocolate and cake.

Although she has attended shows where the tents were literally blown away she has enjoyed every single minute of it. “The people are what make it, everyone is volunteering and we all want to see people enjoy themselves”.

Carrie advises parents to put their mobile numbers on children’s wristbands to ensure their safety.