First pumpkins of the season hit the shelves 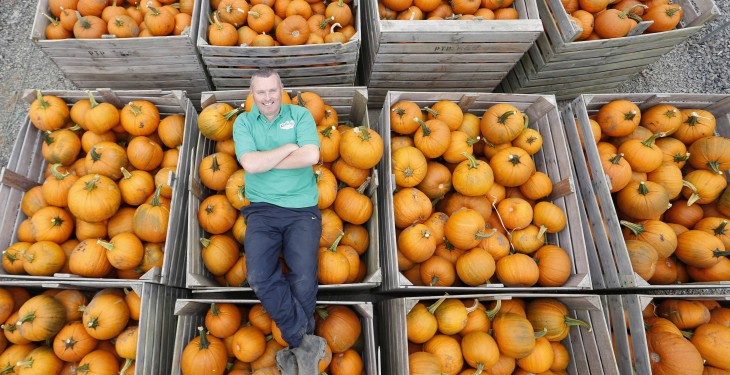 The first pumpkins of the season have been harvested this week by Keelings Farms and are on their way to Tesco stores throughout Ireland. Tesco Ireland expects to sell over 90,000 Irish pumpkins this year grown outside Castlebellingham in Louth.

Pumpkins are a Halloween favourite, in season from October to December and popular for Halloween lanterns or autumn cooking.

Tesco Ireland’s Fresh Buyer, Sinead McDonogh, said: “Our range of pumpkins is bigger than ever this year with Irish pumpkins in stores from next week on followed by eye-catching munchkin, red devil and ghost pumpkins closer to Halloween.”

Grower Oisin O’Gradaigh added: “We have had a bumper crop this year due to the fine weather. We started growing pumpkins here ten years ago on a couple of acres and have since increased in scale to produce over 90,000 pumpkins this year for Tesco Ireland stores. This year we also innovated the way we grow pumpkins by planting the pumpkin seeds in a protective wrap which keeps the seeds clean and insulates them to accelerate growth. We also introduced bumblebee hives into the fields for a more uniform pollination across the crop.”

When selecting a pumpkin, it’s best to select one that feels heavy for its size with a firm skin. Whole pumpkins are best stored in a cool, dark location with plenty of air. They have quite tough skin so when preparing a pumpkin for cooking, it’s recommended to place it on a tea towel to keep it steady and then use a large strong knife to cut it in half. Once it’s cut in half, scoop out the seeds and cut into segments which can be stored in the fridge in an airtight container for up to one week.