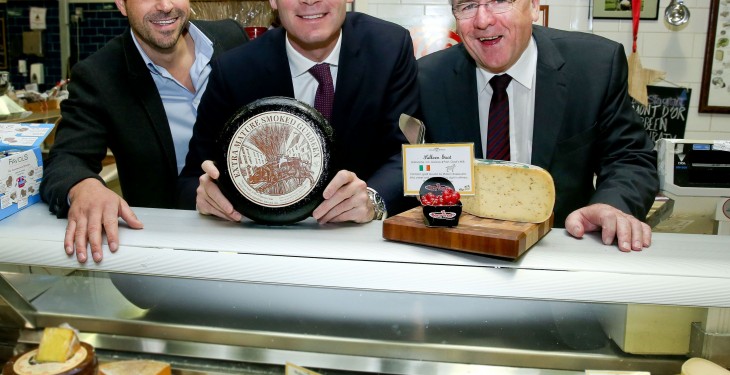 Dr P.J. Cullen, Dublin Institute of Technology, the Minister for Agriculture, Food and the Marine, Simon Coveney, and Minister of State with Special Responsibility for Forestry Tom Hayes.

Teagasc has welcomed the grant awards for agri-food and forestry research, which were announced by the Minister for Agriculture, Food and the Marine Simon Coveney recently.

The funding under the Department’s FIRM, Stimulus and CoFoRD programmes will contribute to the competitiveness and sustainability of Irish agriculture, horticulture, forestry and the food industry.

Teagasc is leading 18 of the 37 collaborative inter-institutional funded projects. Teagasc are collaborators in a further eight projects. In total, funding to Teagasc under these awards totals €7.6 million.

Dr O Mara welcomed Minister Coveney’s and the Department of Agriculture, Food and the Marine’s continued commitment to funding research to underpin and support the agri-food sector in Ireland. He congratulated the Teagasc researchers and their collaborators on their successful application under this call.

The project to create a Virtual Irish Centre for Crop Improvement, led by Dan Milbourne of the Crops Research Department, Oak Park, and involving UCD, NUIG, NUIM, and TCD is particularly exciting. Total funding for this project comes to €2.99 million.

Dr Donagh Berry, Teagasc Animal and Bioscience Research, Moorepark will lead two projects, with ICBF and UCD, on long term sustainable breeding strategies for consistently superior health in cattle with a second project on Multi breed sheep genetic and genomic evaluations. These projects are valued at €1.12 million and €1.20 million respectively.