Winter crops have grown strongly over the past three weeks, with most field operations now up to date, according to the latest Teagasc crop report.

Awns are emerging in barley, while flag leaves are about to emerge in wheat. Septoria is common at high levels in wheat, while Rhyncho is common in two-row barleys, reflecting the high rainfall during the spring.

Despite the late start, spring cereal drilling is virtually complete with only fields that had water lying, left to be sown. Early crops are beginning to tiller, while most crops are just emerging. All crops should be monitored for pest attacks, especially leatherjackets and slugs.

Photos of the moment: 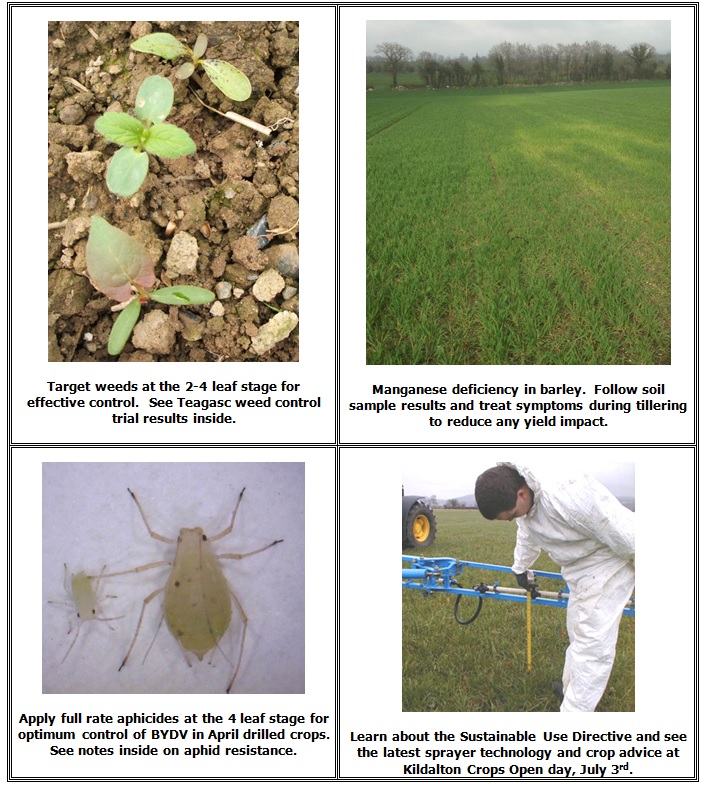 Most crops are at 2nd/3rd node (gs 32/33) with very advanced crops at flag leaf emerging (gs 37). Crops developed rapidly over Easter weekend and most crops are now quite lush and show good yield potential. Septoria levels are very high with most crops exhibiting visual lesions on the top of leaf 4 and most of leaf 5. The has been an increase in the frequency of reported mildew in recent days, while Yellow rust remains confined to pockets in the north east.

Crops growth stages range from gs 37 to 49 (awns just peeping). Disease levels are generally low to moderate but where the first fungicide was delayed or an insufficient rate used, Rhyncho levels are high. Some physiological spotting has been reported on advanced crops. Most crops will receive their final fungicide application in the coming week to ten days.

Most crops are at second to third node stage with flag leaves peeping on advanced crops. Disease levels remain low but mildew has been reported from unsprayed DAFM plots in Backweston.

All crops are in full flower with some crops now in flower over three weeks. Crops are well branched and appear to have good yield potential. Light Leaf Spot levels are very high in some crops, causing main raceme distortion and pod abortion in severe cases.

Beans have established very well in 2014, with many crops now at the 4-6 leaf stage. Some notching from Pea & Bean Weevil has been reported in recent days and needs appropriate treatment. Crops need monitoring for Chocolate Spot and Downy Mildew once flower buds begin to form.

Emergence has been very good in pea crops. There has been an increase in the feed pea area based on seed sales.

Spring cereal drilling is virtually finished following a slow start. Only very heavy ground remains to be drilled. Mid-March drilled cereals (mostly wheat and oats) are just beginning to tiller (gs 21/22) while most barley crops are emerging (gs 11). The incidence of pest attacks is more frequent than expected, given the rapid germination and emergence of crops.

Spring rape drilling is completed in many areas and crops are just emerging.

Take advantage of mild conditions to clean up silage fields over the next few days. Many Dow herbicides are coming to the end of their use up period on farms.

Maize drilling made great progress in the past week with up to 50% of plastic crops in the ground. Open crops are also beginning to be drilled this week. The demand for maize crops, from dairy farmers, has increased this year but crops grown ‘on spec’ for sale are high risk and growers are advised to secure a deal with an end-user before committing to this high cost crop.

Almost all crops are drilled with the earliest just breaking ground. There are some reports of ground pests such as leatherjackets and wireworm. The first herbicide will be applied to crops from early to mid-cotyledon stage of the beet and weeds.

Planting of main crops continue across the country. Approximately 60-80% is planted to date depending on the area. Earlies are growing strongly and there are no reports of blight to date. The market place continues to be challenging despite exports over the past few weeks.

Kale and rape performed well over the 2013/2104 winter period. Drilling of Kale for a main crop will commence in the next week.