Dairygold recently unveiled expansion of its site in Mallow. 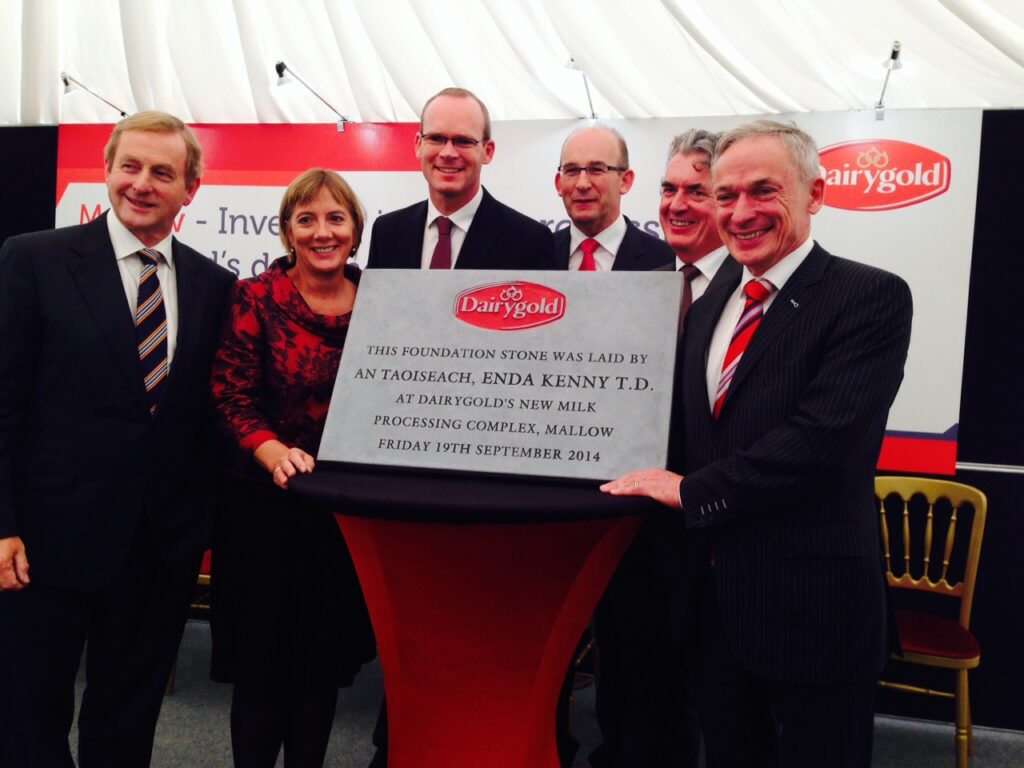 The Taoiseach, Mr Enda Kenny, attended special events today in Mallow and Mitchelstown, County Cork, to mark Dairygold’s €117 million investment in the expansion of its dairy processing facilities at both locations.

The Taoiseach laid the foundation stone for Dairygold’s €83.5 million ‘regeneration’ of its milk processing site at Mallow. Later on he also performed the official opening of Dairygold’s €33.5 million upgrade of its Castlefarm Dairy Processing Complex in Mitchelstown.

Both investments are supported by the Department of Jobs, Enterprise and Innovation through Enterprise Ireland.

The Taoiseach was accompanied by The Minister for Jobs, Enterprise and Innovation, Richard Bruton, the Minister for Agriculture & Defence, Simon Coveney and the Minister of State at the Department of Foreign Affairs, Sean Sherlock, along with representatives of Enterprise Ireland, other state agencies, the broader dairy industry, farming organisations and agri-business interests.

The Mallow investment will see approximately 400 people employed on the site at peak construction. Dairygold itself expects to employ an additional 115 people full-time across its milk processing activities sites by 2020 to manage the increase in milk production over the next five years. The Dairygold expansion will also see a significant number of additional jobs in farming and indirect and downstream activity created in the businesses that supply goods and services to Dairygold.

Referring to the new facilities the Taoiseach, Enda Kenny TD said:  “The Government is highly supportive of the agri-food sector as it is Ireland’s largest indigenous industry. I welcome the €117 million investment in Mallow and Mitchelstown which represents a strong vote of confidence by Dairygold in the capability of its milk suppliers and creates a world class dairy manufacturing capability right here in the Munster region. I commend Dairygold on its achievement and wish the Co-Op every success with its expansion plan which is good news for jobs and economic activity in the region. The Government is determined to secure economic recovery in Ireland and we will continue to provide support for the agri-food sector through the Action Plan for Jobs and Food Harvest 2020.”

Welcoming the announcement, Minister for Jobs, Enterprise and Innovation Richard Bruton TD said: “Food is a key sector which we have specifically targeted as part of our Action Plan for Jobs, and driven by Simon Coveney this area has seen very substantial jobs growth in the past three years. Today’s €117million investment announcement, supported by my Department through Enterprise Ireland, is a massive statement of Dairygold’s post-quota ambitions and of their innovation capability.

“This investment will create 115 new full-time jobs in operations, as well as 400 temporary construction jobs – a hugely welcome boost. Crucially, according to an economic impact study, it will also support more than 1000 additional knock-on jobs in the wider economy over the next five years, as suppliers take on extra staff to meet the increased demand. These are real, much-needed jobs in a rural area, which will provide opportunities for young people who want to get involved in farming and live in their local area. With continued implementation of our plan, we can see more announcements like this in the coming years across rural Ireland”.

Dairygold is Ireland’s largest farmer owned dairy co-operative processing over 960 million litres (20% of Ireland’s milk pool) in 2013 to produce a range of cheese and dairy ingredients for export to more than 50 countries.

From next April Ireland’s dairy farmers will be free to produce as much milk as they wish following the abolition of EU dairy quotas and Dairygold’s 3,000 milk suppliers have forecast to increase annual milk production by up to 60% by 2020. This equates to an increase of 600 million litres per annum and requires a major expansion in Dairygold’s processing capacity.

“Our Post-Quota Strategy not only ensures that we will have the capacity in place to process all of our members’ milk in the post-quota era but it also significantly improves our technological capability allowing us to produce higher value dairy ingredients ”, said Dairygold Chief Executive Mr Jim Woulfe.

“At the heart of our Post-Quota Strategy is our new Milk Supply Agreement between our milk suppliers and the Society. The milk forecasting element of this Agreement gives Dairygold visibility of milk supply volumes for a number of years into the future. Therefore we have devised a modular expansion plan that allows additional milk processing capacity to come on-stream if and when needed. We expect to make additional investment in Mallow in the coming years to cater for our Members’ further milk expansion.” Mr Woulfe added.

Dairygold’s €33.5 million investment has expanded and upgraded the Co-op’s milk processing facilities at the Castlefarm Dairy Processing Complex in Mitchelstown which can now process in excess of 16 million litres of milk and a further 18 million litres of whey per week. The investment will also significantly improve the processing and energy efficiency of the Castlefarm operation.

The €83.5 million Mallow investment will redevelop the existing dairy processing site to deliver a world-class dairy processing facility that can produce a suite of dairy ingredient milk powders up to Infant Milk Formula standards.

The Mallow investment will also provide the infrastructure necessary to facilitate the installation of a second 7.5 tonne / hour dryer in the coming years depending on the speed of milk production scale up among Dairygold’s milk suppliers. When the site is fully established it will be equipped to manufacture up to 450 tonnes of milk powders per day in varied specifications up to Infant Milk Formula standard.