A joint research project between Teagasc and UCD has discovered a strain of Rumen Fluke on a Irish sheep farm for the first time.

The work, funded by the Department of Agriculture, Food and the Marine, identified the presence of P. leydeni (a strain of rumen fluke) on a farm in Co. Galway.

The farm had a flock of 66 sheep, which were grazed along side cattle in a mixed enterprise.

The findings of the project were published in the Journal of BMC Veterinary Research earlier this year, where the authors said further studies are required to clarify the implications of P. leydeni.

The research also aimed to find the prevalence of Rumen Fluke on Irish sheep farms, which is important for designing appropriate control strategies.

And to identify the prevalence of the parasitic disease on Irish farms, the researchers recruited 304 flocks and conducted a study between November 2014 and January 2015. 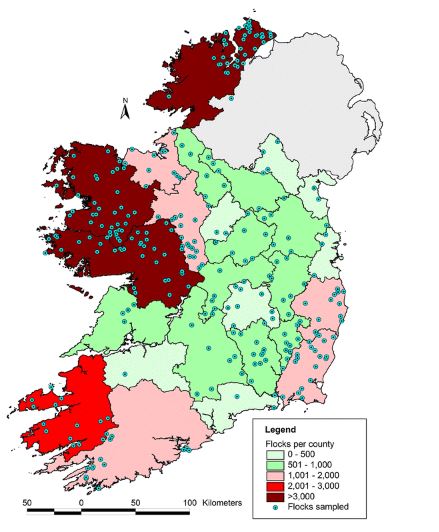 The researchers found that there was an exceptionally high prevalence of Rumen Fluke among Irish sheep flocks.

From the animals tested (235 sheep) for the parasitic disease 77.3% tested positive for Rumen Fluke, when this is scaled up to a national level, it brings the estimated true prevalence to 85.7%.

It also shows that the commonness of Rumen Fluke varied from county-to-county, ranging from 18% in Co. Carlow to 100% in the counties of Clare and Waterford.

They also identified a novel relationship between the Suffolk breed and higher fecal egg counts for Rumen Fluke, with the predominant rumen fluke species found being C. daubneyi.

Under the study, approximately 40% of the sheep were Suffolk and Suffolk crosses, while Texel and Texel crosses (23.3%) where the second most common breed.

The remainder were a mixture of Charolais, Cheviot, Leicester, and Blackface Mountain.

The researchers found that flocks in which Suffolk were the predominant breed recorded significantly higher fecal egg counts than all of the other breeds examined.

This, they say, could provide another line of research on breeding Rumen Fluke resistant or resilient sheep.