The recovery in prices for hoggets continues this week, with top prices of between €6.30/kg and €6.40/kg being secured currently.

Since prices came back in mid-to-late January, there were reports of producers holding off marketing hoggets until prices were lifted again and this can be seen from the weekly kills, with the number of hoggets processed falling significantly from over 52,00 towards the middle to the latter half of January to just over 38,000 head last week.

However, the lift in factory prices could be seen at sales held yesterday, with prices edging upwards on what they were this time last week for finished lambs.

Speaking to Sean McNamara, the sheep chairperson of the Irish Cattle and Sheep Farmers’ Association (ICSA), he believes that the factory prices will reach the highs seen last month.

He explained: “We are seeing prices move back to where they were a couple of weeks back. This week we are seeing deals being secured up to €6.40/kg, with possibly some getting 5c/kg more.

“We were up to €6.50/kg there a few weeks back so I’d be hopeful we will get back to those highs again shortly.”

Last week’s sheep kill (week ending February 7) totalled 38,573 head which is a decrease of 5,086 head on the previous week and a substantial drop of 13,506 head from a fortnight ago.

The number of hoggets processed for the week ending February 7 totalled 33,669, which is 4,362 head less than the week before.

Meanwhile, the number of ewes and rams processed at meat processing plants amounted to 4,898 head last week, which is also back from the week before (-740 head). 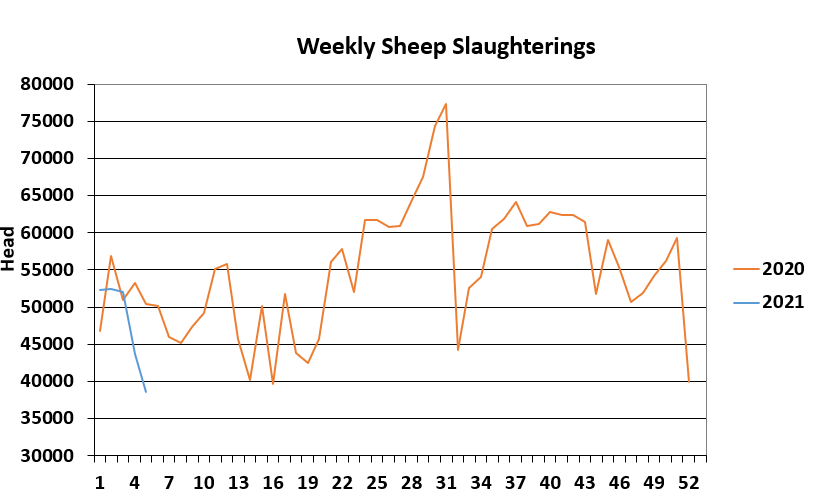