The presence of butchers and wholesalers helped drive the spring lamb trade in Kilkenny Mart, Cillin Hill on Monday, according to the Mart’s Auctioneer George Candler.

Candler said there was an excellent sheep trade, with the prices for lambs exceeding expectations. Lambs sold to a top price of €134/head, up from €131/head last week.

The Auctioneer said there was an excellent trade for all of the sheep on offer, including cast ewes which made €60-125 each and ewes with single lambs which traded from €130-195.

There was also some improvement seen in the spring lamb trade in Mountbellew Mart on Saturday, according to the Mart Manager Marianne Higgins.

Higgins also said there was very strong buyer activity for good quality ewe hoggets. These lots traded from €126-161 each. Cast ewes made €75-118 each, with the majority of lots making over €100.

However, Higgins said there was a smaller number of ewes and lambs on offer and these lots traded from €138-186.

Spring lamb prices improved by €5-8/head in Carnew Mart on Saturday, according to the Mart Manager David Quinn.

Butcher and factory hoggets met a similar trade to last week making €108-122 each, while cast ewes traded from €65 up to €129 for the heavier fleshed lots.

There were good numbers of sheep on offer in Roscommon Mart on Wednesday, according to the Mart Manager Maura Quigley.

Quigley said the prices paid for lambs were even better than last week, as the hammer fell on most lots from €106-119 each.

However, the cast ewe trade was a little easier than the week before and these lots traded from €60-110, while ewes with twin lambs made up to €299 and ewes with singles sold up €208 each. 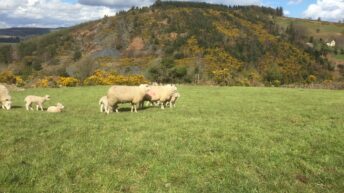