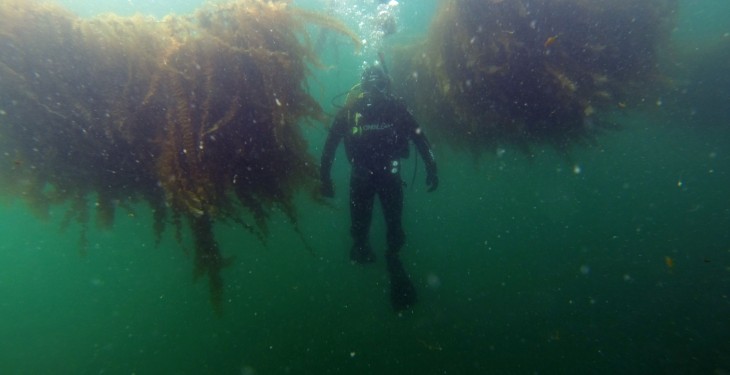 An EU-funded AT~SEA project, with Irish partner Oceanfuel Ltd, based in Galway, has developed advanced textiles that give high yields from floating seaweed farms and allow easy, mechanised cultivation.

Seaweed is an important but under-exploited resource for food and feed ingredients, biochemicals and the production of biofuels. But it has been difficult to harvest efficiently on a large scale. Until now.

Project co-ordinator Bert Groenendaal of Belgium-based Sioen Industries said that farming seaweed on the scale made possible by the new textiles can help create a multi-billion euro industry in Europe – boosting growth and jobs. Sioen is one of seven companies involved in the project, along with four research centres. “The economic potential for seaweed is huge. Businesses are interested in seaweed for many different applications such as food and food additives, animal feed, chemicals and even fuel,” he said.

European Research, Innovation and Science Commissioner Máire Geoghegan-Quinn said: “AT~SEA is just one example among many of how EU funding helps researchers and businesses collaborate to innovate. This research will allow EU businesses to farm a valuable resource efficiently, helping them compete in global markets. Horizon 2020, the EU’s new €80 billion research programme supports companies and businesses in bringing new ideas from lab to market quickly and cost-effectively.”

Tests of AT~SEA’s textiles at trial sites in Solund, Norway, Oban, Scotland and Galway, Ireland have produced yields of up to 16kg of wet seaweed per square metre – three to five times the yield of traditional seaweed farming.

Currently, seaweed is obtained by harvesting wild seaweed or by rope-based cultivation. Neither of these scale up easily as both methods are labour-intensive with relatively low yields.

The project team developed textiles that can support large numbers of seaweed plants without breaking up or attracting unwanted plants or molluscs. Bio-sourced coatings on the textiles protect young seaweed and boost growth.

The textiles are suitable for large, 1 mm-thin mats on which seaweed plants grow, held a couple of metres below the sea’s surface. When the seaweed is fully grown, ship-based machines cut the plants from the mats and direct them to flexible storage tanks made from AT~SEA’s advanced textiles.