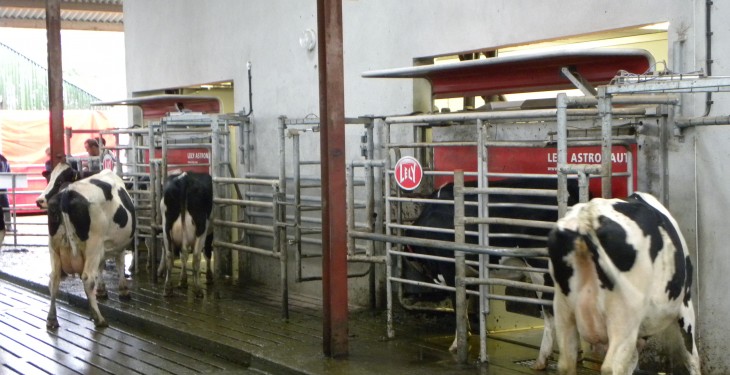 Increased milk production, grassland management and herd health are all major benefits of the Lely robotic milking system, according to one user.

These were the key messages at the dairy open day of Aidan Deasy, Ballinhassig, Cork yesterday (Thursday).

They initially plan to reach 180 cows. If this is successful they will go to 200 cows but this is dependent on the grazing platform.

They also plan to install a third robot later this year.

The Deasys are currently milking a herd of British Friesian cross Holstein cows so the cow type is not too extreme and they have no plans to change.

Milk production has increased 10% since the farm switched to a robotic milking system as a result of the feed to yield system.

“The solids of our cows have not changed but we are now producing more milk/cow. The robots allow us to maximise milk produced/ha.”

Concentrate usage is on average 1t/cow/year with a six week calving rate of 84%.

The robots have also helped in terms of grassland management said Aidan Deasy.

I now have more time to focus on grassland management. When other farmers are milking cows I am monitoring my grass.

Deasy admitted that the farm seems to be growing more grass since he introduced the robots and it has allowed him to utilise and manage his grass better.

Cows spend on average 260 days at grass and are turned out straight after spring calving. The cows are currently on 1kg of concentrate/day.

Deasy also said that attention to detail is essential when farmers are preparing to make major changes to their business.

“There are too many farmers starting projects that have not planned properly.”

He added that he used a five year milk price average (30c/L) when he was budgeting for the robot installation.

The new milking system is financed over a 15-year schedule but he hopes to have it repaid in 10 years.

“We used a five year average when we were budgeting for the installation of the robots. 30c/l was our five year average. The equipment will have to be paid for in a good year or a bad year.”

Deasy also highlighted how beneficial the Lely support service has been in the day-to-day running of his business.

“When we are busy calving cows it helps a lot that we can ring Lely to make system changes. They often know the changes we want to make before we tell them.”