Risk to EU crops because the weather is too warm (That’s not a good thing!)

Latest EU crop monitoring suggest crops in some parts of Europe could be at risk of frost damage due to warmer than usual weather since December.

The European Commission’s latest frost-kill model simulations show no or only a slight degree of hardening in the Mediterranean region and a wide area between Ireland and eastern Poland, due to the fact that this region experienced mostly warmer-than-usual daily temperatures since early December.

Hardening is the bio-physiological process of winter cereals which transforms the cellular starch into glucose, thereby raising the freezing point of the cellular liquids and increasing the low temperature tolerance of the plants.

The Commission’s monitoring suggests winter wheat only partially reached the hardening stage in some parts of Germany, the Czech Republic, Slovakia and in the Balkan Peninsula.

It says the weakly hardened crops run the risk of incurring frost-kill damage in the event of a sudden freezing air intrusion accompanied by shallow snow cover.

The progress of the hardening process is more advanced in northern and eastern Europe. 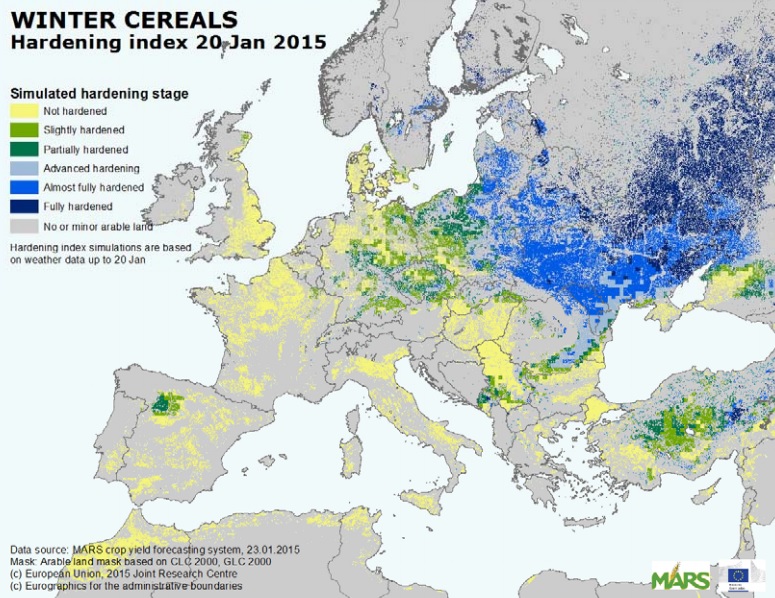 According to the Commission, crops are typically in an advanced or almost hardened stage in Norway, Sweden, the Baltic countries, eastern Poland and Romania.

Aside from the northern shore of the Black Sea and territories north of the Caucasus Mountains, most of Finland, Ukraine, Belarus and Russia were sufficiently cold to allow full or almost full hardening of winter crops.

The Commission’s crop monitioring service says due to the dry autumn, the establishment of winter wheat was less than optimal in the northern and north-eastern parts of Ukraine, as well as in the Central Federal District and northern half of the Southern Federal District of Russia.

As a result, it says the emergence of winter wheat was problematic and the crop remained weaker and smaller than usual at the start of winter. Model calculations indicate the occurrence of crop damages in southern Russia and parts of Bulgaria, Romania and Poland.

The Commission says considering the poor condition of winter wheat, it is probable that the north-eastern regions of Ukraine are also affected by frost kill, and that the actual damages are even more serious in Russia than the model results indicate.

It also says the shallow snow cover currently in Belarus, the western and central areas of Ukraine, and southern Russia, may lead to further frost-kill damages in the event of bitterly cold temperatures.