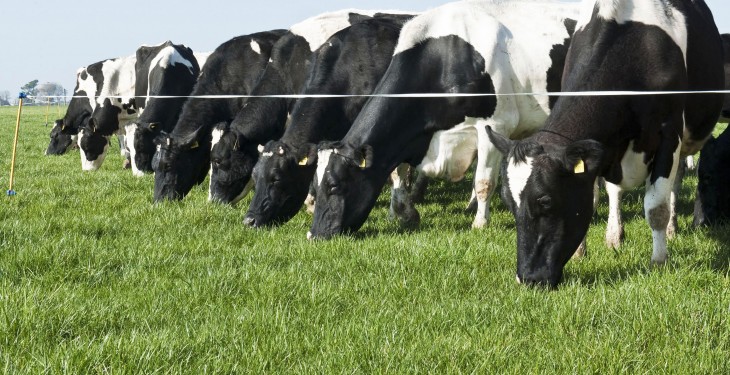 A significant expansion in milk production in Ireland post EU milk quota abolition will require increased animal productivity from pasture. In addition to increased grass production and utilisation on existing dairy farms, additional new dairy enterprises may emerge on more marginal soil types.The Border, Midland & Western region of Ireland comprises 13 counties including the six border counties with Northern Ireland and accounts for 47 per cent of national land area. Notwithstanding its scale, the region currently accounts for only 25 per cent of total national milk production.

From an agronomic viewpoint, the wet mineral soils, which are characteristic of the region, impede drainage and have traditionally been associated with a shorter grazing season and lower pasture production compared to the south of Ireland. Many studies have focused on the potential of increased stocking rates (measured as cows / hectare; SR) and increased feed supplementation to increase productivity within pasture systems, however, few studies have focused on the implications of alternative grazing systems differing in SR and feed supplementation level specifically within soil types such as those found in the BMW region.

The function of the Ballyhaise dairy research project is to provide farmers in the Border Midlands Western (BMW) region with locally generated research information to increase the profitability of their farm business and to demonstrate best practice grass-based milk production systems.

From its origin in 2005 the project has focused on increasing grass growth and utilisation, improving milk solids production per hectare, improving herd fertility performance and reducing feed costs. Over the past eight years these improvements have led to a more profitable and robust system which is capable of delivering a reasonable return to farmers within a production environment characterised by increased milk and input price volatility.

An intensive reseeding programme has taken place at Ballyhaise over the past eight years as well as improvements in grazing infrastructure and soil fertility. Regular soil testing is carried out to monitor soil fertility status over time.

Soil fertility is a major constraint for many farmers in the region; however soil P and K indexes at Ballyhaise have been traditionally high. Soil pH is low and 20 per cent of the farm is receiving two tons of ground limestone per acre annually. An improved road network has made it possible to graze grass during wet weather conditions while reducing the level of pasture damage by poaching. The grazing infrastructure is designed to facilitate a flexible grazing management approach. Techniques such as on – off grazing and block grazing are essential tools used to achieve a high level of grass utilisation over a long grazing season of 280 days.

More recently, poor weather during 2012 and during spring 2013 have provided a stark reminder of the high production costs associated with poor grass growth on wetter soils during inclement weather. Grass growth reduced to 11 tons DM/ha in 2012. Concentrate feed inputs consequently increased by 36 per cent in 2012 to 850 kg per cow and based on higher concentrate prices, resulted in total concentrate feed costs of €240/cow compared to €130/cow in 2011.

The overall costs of poor weather and reduced grass growth also required that an additional €140/cow was spent on winter feed purchased from outside the grazing block during autumn 2012. It is evident that even with excellent grass management farmers operating on heavy soils need to have a substantial reserve of forage available for use during wet years where growth will be severely impacted. Despite the poor growth during 2012, the college farm has recovered to grow 9.5 tons DM/ha up to the beginning of September 2013.

Poor fertility performance is a major issue for many dairy farmers in the region leading to reduced profitability and restricting their ability to grow herd size in a post quota environment. A compact spring calving pattern is essential to maximise the production of high quality milk solids from grazed grass.

There is significant scope to improve the calving pattern on farms in the BMW region to increase animal performance from grazing. In comparison with Ballyhaise college where in excess of 80 per cent of the herd calve during the 42 days after planned start of calving, only 50 per cent of cows on BMW dairy farms have calved during the same period. The reproductive performance of the Ballyhaise herd has improved steadily each year as herd Economic Breeding Index (EBI) has increased.

The overall herd empty rate has decreased from 36 per cent in 2005 to 9 per cent in 2013, while the critical six week calving rate has increased from 56 per cent to 83 per cent during the same period. In addition to producing additional higher value milk from grazed grass, in each of the last 2 seasons, the college have also sold surplus dairy stock and are now reaping the numerous financial benefits from a healthier more robust high EBI grass based dairy herd.

Profit monitor data collected from farms in the BMW region show that average farm output in the region is 900 kg of milk solids (MS; fat plus protein) per hectare with a concentrate input of 890 kg/cow. In contrast, and by virtue of improved grazing management and a more fertile and compact calving dairy herd, MS production/ha at Ballyhaise has increased from 950 kg in 2005 to 1,250 kg in 2012.

The top 10 per cent of producers in the BMW region achieved a very high level of output and profitability per hectare during a difficult year which demonstrates the scope which exists to increase milk solids output and profitably at farm level even during periods of inclement weather. The highest profitability producers in the BMW region are attaining this high level of profit per hectare via high milking platform stocking rates (3.19 cows / ha), moderate levels of feed inputs and consequently through a high level of grazed grass utilisation, similar to Ballyhaise college.

With the abolition of milk quotas, some dairy farmers may consider commencing calving earlier to increase total lactation length and milk production/cow post quota. This strategy is likely to increase supplementary feed requirements and result in a reduction in the proportion of the animal diet achieved from grazed grass.