Video: Those hilarious farming ads from the 80s made a comeback on TV recently 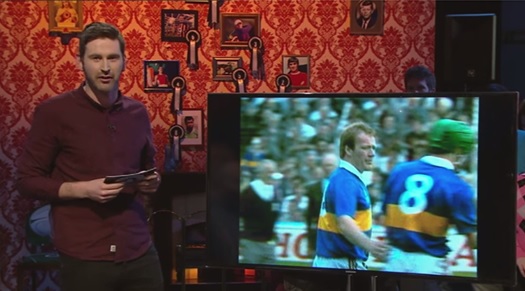 Ciaran Murphy, a presenter on the show said that cattle worming products were the Pepsi and Nike of 80s and 90s Ireland and that Second Captains had compiled the definitive list of GAA farming endorsements.

DJ Carey was first up in the montage and at the time he endorsed Tetra Delta for the treatment of mastitis in lactating cows.

As well as DJ Carey the montage also includes Pat Spillane, former Kerry footballer, who endorsed Tendrleen. According to Tendrleen, the programme was based on obtaining market weight within 12 months, creating a fully lean carcass and it was first introduced in 1963.

“For my money there’s no better substitute for Tendrleen,” Spillane said on the ad for the product.

Teagasc featured on the list of farming endorsements, with Pat Dwyer, former Kilkenny hurler, supporting the product by saying “there’s no beating Teagasc for soil and silage testing.”

Bobby Ryan featured on the programme, endorsing Zerofen, the sheep and cattle wormer. “Wipe out worms before worms wipe out your profits,” the former Tipperary hurler said.

“Believe it or not worm ban could be topped, step forward a galaxy of GAA stars, special effects and more cows, all combined to spread the good word on Cepravin; your only man for the eight week dry period pre-calving season,” Murphy said.

“Where next after the big budget epic sweep of Cepravin, the only way the industry could go from there was to scale back and use that old advertising adage of sex sells,” Murphy said. This segment featured Bobby Ryan again, this time dosing a cow with Zerofen and comparing the former hurler to Kim Kardashian.

Take a look at the Second Captains montage of GAA farming endorsements;