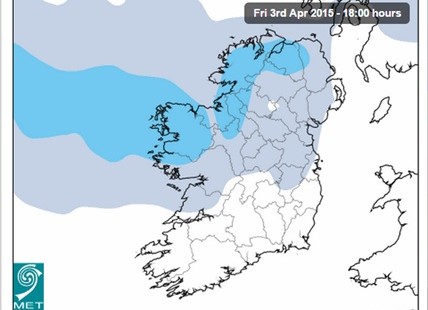 The week ahead will be unsettled weather wise and there will be outbreaks of rain with some sunny spells, Met Eireann says.

Met Eireann has issued a status yellow wind warning for the country valid until tonight (Monday). There will be southwest to west winds of mean speeds 50-60 km/h will gust 90-105 km/h in many areas during the second half of today (Monday), it says.

Met Eireann says that it will be very windy and showery tonight (Monday) in west to northwesterly winds and it will be otherwise clear and cold with lowest temperatures of 1 to 5 degrees.

On Wednesday night will be cloudy overnight with more general rain, it says. Thursday will be cloudy with scattered outbreaks of rain with highest temperatures of 9 to 12 degrees in relatively light winds, Met Eireann says.

Currently for the Easter weekend, Met Eireann says that there will be sunny spells and scattered showers on Good Friday with highest temperatures of 9 to 11 degrees. Overall Met Eireann are promising a good deal of dry weather for the weekend but temperatures will only reach 9 to 12 degrees at best.