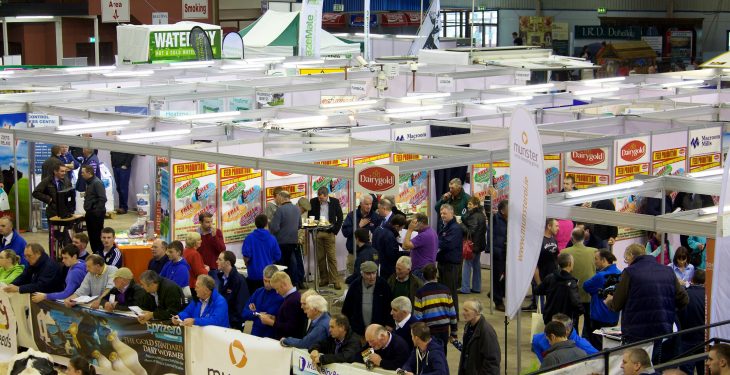 There will be a record 120 trade stands at the 34th National Dairy Show, Ireland’s largest indoor Trade Stands Show.

The show, where exhibitors will be displaying their latest products, will take place on Saturday, October 22, at the Green Glens Arena, Millstreet, Co. Cork.

The show covers all aspects of farming, with a particular focus on the requirements of dairy farmers.

Visitors to the show can call to a wide variety of exhibits from concentrate feed trade to milking machines, cattle breeding companies and farming organisations.

Meanwhile, at this year’s event there will be a Bull Mother and Progeny live cattle display which will give people an insight into where a particular bull originates and the type of animal that a bull is breeding.

The venture, which will be sponsored by Nitrofert, will assist breeders in making a more informed decision about the animals that they want to work with on their farms, according to the National Dairy Show.

The show will also feature a Food Village for the first time this year, where there will be samples and tastings of artisan food products.

Some of the producers will include Clonakilty Black Pudding, Hyde Whiskey, O’Brien’s Spiced Caramelised Nuts, The Hungry Crow and Ummera Smoked Produce to name just a few.

At the Food Village there will be products containing local Irish beef and pork, smoked salmon and duck, as well as smoked beef.

Meanwhile, there will be a mixture of sweet treats and healthy produce on display including seaweed based products as well as ice-cream and caramelised spiced nuts.

Many of these producers have won awards at both national and international level with samples available from Hyde Whiskey, which was recently named ‘Best Irish Single Malt Whiskey in the World’.

The show will open at 9am on Saturday, October 22, in the Green Glens Arena Millstreet, Co. Cork.

‘Co-ops are holding back on milk price improvements’