‘Protests impact on supply of fresh beef to important customers’ 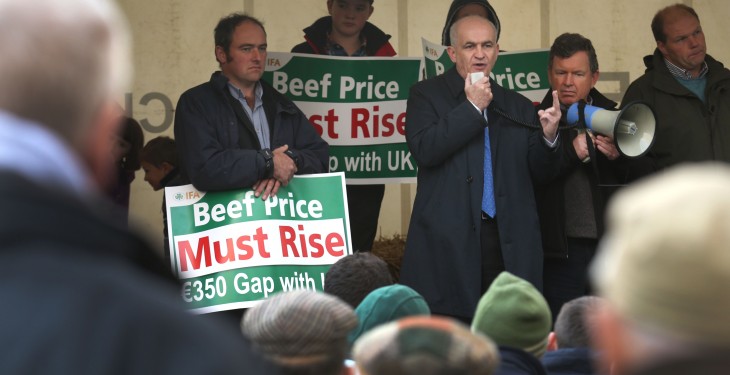 IFA President Eddie Downey talking to farmers, at the Kepak plant in Clonee

Beef processing plants have had a further two days of blockades and business disruption and according to meat processor representatives Meat industry Ireland (MII) this is damaging to business, imposes further costs on companies and has impacted the supply of fresh beef to important customers.

Welcoming the forthcoming Beef Roundtable forum tomorrow (Wednesday) a spokesperson for MII said negotiations need to be done around the table and not through blockades, business disruption and media soundbites.

“MII has engaged fully over the last two weeks as per its commitment to the Minister. It is important that we build on the progress made over the past two weeks. Therefore it is regrettable that the IFA has decided on renewed protest action rather than further dialogue,” he said.

The spokesperson also said the continued misuse of inappropriate price comparators is misleading and is exacerbating the situation.

He stressed that the June 2014 independent Dowling Report confirmed that focussing solely on the UK R3 steer comparison does not give an accurate reflection of the true extent of the range of animals that Ireland produces and the diversity of meat cuts we sell across all our markets.

“A more appropriate price comparator will take account of all grades of all animals (steers, heifers, cows, bulls, young bulls) that Ireland produces and all the various markets to which we export meat cuts. Official EU Commission figures verify that the Irish cattle price is over 101% of the EU average. These Commission figures take account of all categories of animals, not just one grade of one animal, and compare the Irish prices to all EU Member States.”