Presenting key results from a Teagasc/UCD study, which looked at the differences between wether (castrate) and entire ram lambs, Diskin said: “It is refuted that there are taint issues from the meat produced from ram lambs; particularly from autumn onwards, as rams reach puberty and enter the breeding season.

“If that exists, it is to a certain degree detrimental to the sheep industry. From anecdotal information, butchers and meat processors have a preference for wether lambs; even though they don’t always reflect that preference by paying more for wether lambs.”

However, as little Irish data was available, researchers from Teagasc and UCD developed a study to quantify the different problems and to see is ram taint an issue with Irish lambs.

During the finishing period, the lambs were allowed tactile, olfactory and visual contact with each other through the pen partitions and also had visual and tactile contact with non-pregnant cycling ewes.

The current Teagasc/UCD study has confirmed the production benefits of leaving lambs entire and a low-to-modest incidence of meat samples from ram lambs with undesirable sensory attributes.

However, castration did not eliminate the problem of getting undesirable sensory traits from meat samples; although the incidence was lower in meat from castrated lambs. This would suggest that the so called ram taint issues might be due to other factors such as slaughter age, diet, consumption habits and culinary methods.

While castration reduces but does not eliminate the risk of obtaining problematic lamb meat samples, the consequences of castration are reduced production efficiency, as well as the increased likelihood of higher fatness. 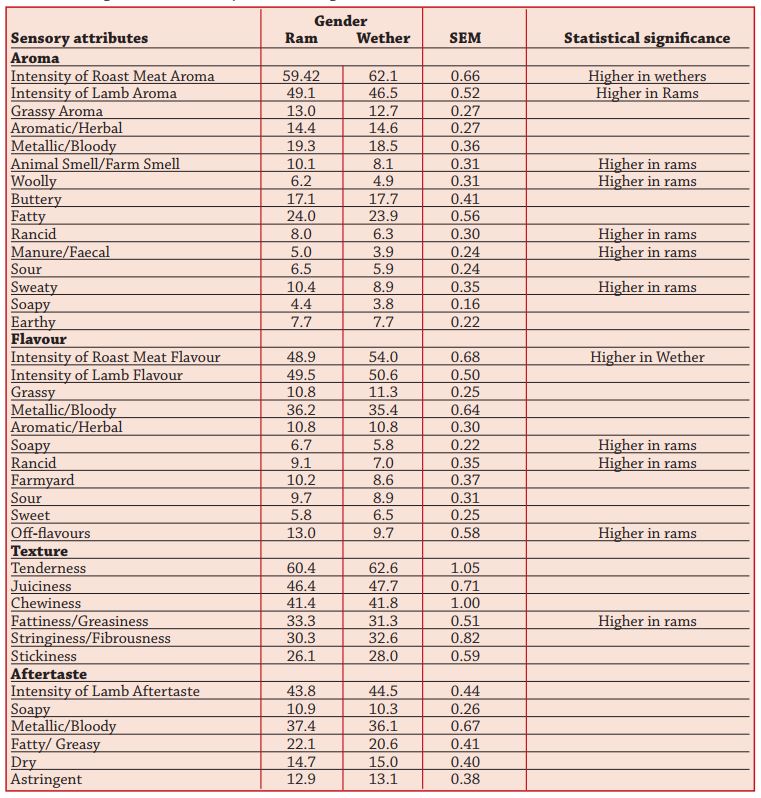 Should Irish sheep producers castrate lambs or not?

There are undisputed efficiency advantages of leaving male lambs entire, Diskin said, which result in these lambs being ready for slaughter 10-14 days earlier than wether lambs.

Also, ram lambs are leaner which, from a consumer point of view, is desirable. However, ram lambs reach the desired target fat score of three at a heavier weight compared to wethers.

However, we must balance the advantages with the disadvantages and it can be harder to finisher rams under an all-grass system.

Whether producers castrate lambs or not will depend on their production system, time of lamb finishing, flock size, ability to separate ewe and ram lambs in the autumn as well as signals from the market place, Diskin said.

The trend toward non-castration has become well-established in recent years, he said. And, if processors require more castrate lambs, it’s probable that they will have to reward producers by paying a premium for such lambs.