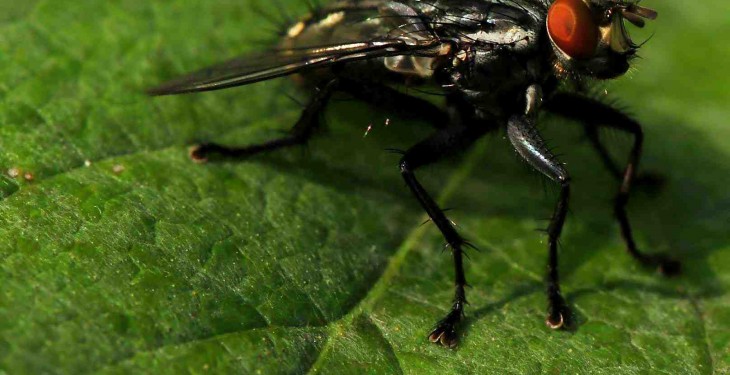 What do you think of the humble house fly ? Is it a pest; an irrelevance; or a carrier of disease?

Entrepreneur Jason J. Drew believes that they can be something else entirely: The possible saviour of the world. Simply put, humans need protein, much of which is sourced from poultry and fish. But supplies are dwindling, and the fish and birds that we eat need their own sustenance.

Enter the fly. The ubiquitous and prolific insect is already a source of protein for countless creatures in the natural world, so why not harvest our six-legged friends in an environmentally friendly way? After all, flies reproduce at a remarkable rate.

“One kilo of fly eggs turns into 380 Kilos of larvae in 72 hours,” says Jason. “Larvae are what free range chickens in fields and fish in streams eat as part of their natural diet – ask any fisherman! This natural source of protein has been increasingly replaced in our industrial farming operations with the more readily available fishmeal.  The chemical composition of fishmeal is almost exactly the same as that of fly larvae – which is why it was chosen as a substitute.”

Jason’s company feeds flies on waste and creates a protein-rich feed from the larvae – a fly farm, so to speak.

“We take waste nutrients from slaughterhouses – blood and guts – and feed this to the eggs laid by our fly breeding stock. These eggs hatch into larvae and grow at an enormous rate once you take away the environmental factors that stop this happening in nature. We’ve copied nature and led the process of making protein from waste nutrients profitably, sustainably and on a large scale,” he says. “We are already in production and we believe that we can produce  Magmeal™  at scale for around $800 (€613) per tonne which compares favourably with fishmeal – which is currently around $1850 (€1419) per tonne, and likely to rise unless the oceans can be better managed.

The idea came about when Jason was saw flies feeding on discarded blood.

“I was standing at the back of a slaughterhouse looking at a dam of blood, surrounded by flies,” he says. “I remembered as a child that there was only two ways to catch fish in my grandparents’ river, one was to tie a fly on to a line and cast it onto the water and the other was to attach a maggot or a worm onto a hook and dropped into the water.  Having seen the devastation that the production of fishmeal causes to our seas and the unsustainable nature of aquaculture and indeed chicken farming which depends on fishmeal, it dawned on me that we could use waste recycled by flies and make our industrial agriculture far more sustainable.

Jason’s book is subtitled How the Fly Could Save the World, which is a bold statement, but he stands by it: “I certainly think that flies are a part of the solution [to our protein sustainability problem], along with perhaps algae and other organisms that can recycle waste nutrients.”

A common theme in Jason’s argument is that this recycling of leftover animal parts and waste is essentially recycling. Is it fair to say that recycling principles aren’t as common in food production as in, say, paper? “Not yet,” he admits, “but within 15 years we will consider it as normal to recycle waste nutrients as we do our paper and plastic today.”

Farming insects to feed their young to livestock might seem unpleasant to some. Is the public ready for this inventive – if unsavoury – idea?   “Initially people think ‘uugh’,” he admits.  “In fact one radio presenter said to me ‘I would never eat fish fed on flies!’ I went on to question her as to whether she eats wild trout and salmon. ‘Yes,’ she replied. Once I pointed out that flies are what wild fish have been eating for tens of millions of years she changed her opinion. It is the same with the public; we are often too divorced from nature to understand what is really natural.”

Jason also says that attitudes vary from country to country: “Many countries in the world which eat land insects are more open to the idea. Ironically it is the West that eats the insects of the seas voraciously; shrimp, prawns, lobster and crab. We have forgotten how tasty our land-based insects can also be.”

It’s looking likely that Irish farmers – or more specifically their livestock – will be able to sample Magmeal in the near future.  “We are exploring a partnership with a local Irish firm to look at bringing nutrient recycling to Ireland,” he says. “I would hope that we would conclude this during the course of 2013 and we would be looking at production a year or so later.”