Adverse weather conditions has seen the quantity of cereal available for use in Europe fall below the five-year average, according to the European Commission.

In its EU Agricultural Outlook report, the Commission says that the overall usable cereal production in the EU for 2016/2017 is estimated to reach 294m tonne – this is 2.5% below the five-year average.

Unfavourable weather conditions during the cropping season have had an impact on cereal crops, with the yields from soft wheat and maize expected to decline by 3.1% and 11% when compared to the five-year average.

The Commission also expects the volumes exported from the EU in the coming year to decline due to supply factors, such as the lower quality of milling wheat and malting barley, combined with demand concerns from China.

Meanwhile, imports of maize and quality milling wheat are likely to increase in 2016/2017, while the use of coarse grain feed might increase slightly.

This increase is modest, it says, due to developments in the animal sectors and is likely to follow a switch from maize to wheat and barley in the short run.

A move back to cereal production

The Commission also expects the shift towards main cereal crops to continue.

This is due to advances in breeding and pest control techniques mainly tailored to the main cereal crops of wheat, maize and to a lessor extent barley.

And better demand prospects are expected to propel their relatively profitability further compared to the smaller cereal crops.

Looking at yields, the Commission report also suggests that yield increases are mainly to be expected in the EU-N13 grouping of countries, as EU-15 countries are close to their agroeconomic maximum. 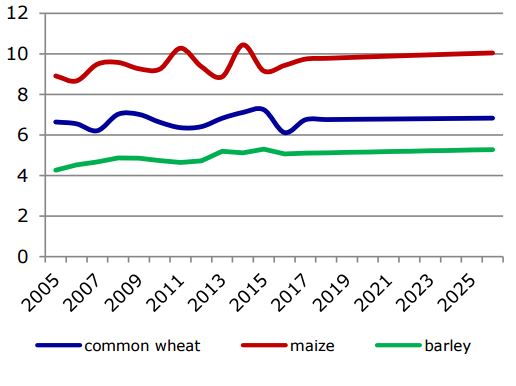 This will be mainly driven by developments in the feed market on the back of an increase in dairy and meat production.

Demand for cereals is also driven by a further small increase in ethanol production, although its overall share in total cereals domestic demand remains limited at 4%, it says.

Industrial and food use of maize is also expected to increase together with the increased production of isoglucose as an alternative to sugar, the Commission report says.