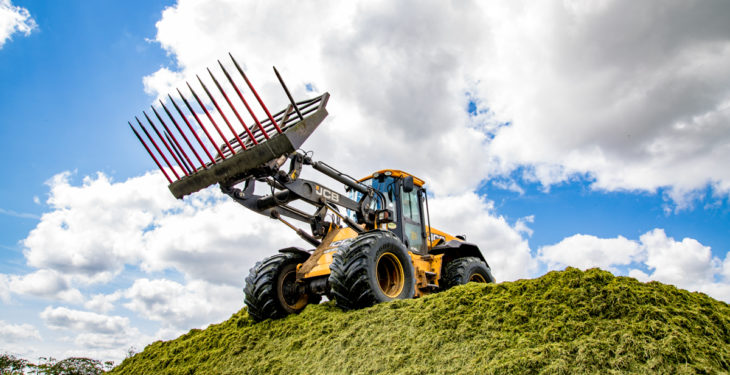 Well away from the frenzied and frenetic foray that is the silage cutting campaign, we’re taking a nostalgic look at loading shovels – specifically those machines that have shaped the Irish silage-harvesting landscape during recent decades.

We’re looking for your input; we want to find out which machine is held in highest esteem – as the iconic Irish ‘silage’ loader.

This really is a case of comparing apples and oranges; we’ve compiled an eclectic mix of contraptions for your perusal. Some are vastly bigger or heavier than others; however, the machines we’ve chosen were ‘front-line’ in their day – in some cases that ‘day’ was many moons ago.

We settled on seven machines; though far from exhaustive, this line-up does include many of the trend-setting loaders of their respective eras – from as far back as the 1970s right up to more recent times.

The list of contenders (in alphabetical order) is as follows:

Don’t forget to vote (below)!

What is (or was) the most iconic ‘silage’ loader in Ireland?

Caterpillar, while a global giant in construction circles, has not figured all that prominently on Irish silage pits (or ‘clamps’ if you prefer) during recent decades. However, back when loading shovels first appeared on the silage scene, the 910 was one of the most obvious choices.

In the late 1970s – but more so in the 1980s and beyond – a significant number of these ‘pocket rockets’ set the pace, displacing tractors and push-off buckrakes in the process.

The original 910 is very much a ‘pint-sized’ loader when compared with the goliaths that now scour the countryside; it had just 65hp at the flywheel – though that had been upped to 75hp by the mid-to-late 1980s.

Caterpillar – or CAT – still makes loaders that bear the 910 model designation, though it has now reached the ‘M’ variant. While bigger, the 910M still follows the same basic premise as the original of the species.

Does the original 910 – hot off the blocks in 1973 – still evoke nostalgic memories for you? Can you still hear the bang of that timber-paneled tail-door (long before ‘up-and-over’ tail-gates), as the trailer pulls away – having deposited another load of grass ready to be pushed up?

Was the 910 the iconic ‘silage‘ loader – helping to shape the silage-cutting scene back in those heady days of the ’70s and ’80s?

Yet another contender from yesteryear is the once-famous Clark Michigan 35B. The brand has since disappeared, but a dwindling number of 35Bs still remain; these are largely relegated to lighter duties now.

But first; who or what was Clark Michigan?

In the mid 1980s, Clark Equipment Company was merged with Volvo BM to form the VME group. Clark’s roots stretched back to the early 1900s. Its Michigan brand encompassed loading shovels and other construction equipment.

Later on, during the 1990s, the Volvo group bought out Clark’s stake, giving it complete control of VME. That triggered a name change – from VME to Volvo Construction Equipment. That move banished the ‘Clark Michigan’ brand to the history books.

Clark Michigan, as a brand, did have a presence in Ireland in its own right. Some Irish agricultural contractors of an older vintage will have fond memories of the 35B. For many, it was their first foray into a purpose-built loading shovel.

These machines were, in some parts of the country, regularly seen scaling steep silage pits during the sultry, summer months.

Now’s your chance to pay homage to this almost-forgotten and all-but-extinct beast of burden.

For many contractors – and their operators – JCB is now the default choice when it comes to an ‘agri-spec’ loader; there are a plethora of models to choose from.

Perhaps the machine that really enabled the British firm to climb so high in the silage stakes was the original 414S Farm master.

Though some components were not perhaps as hard-wearing – especially when it came to front-end bushes and axles – as some of its quarry-proven counterparts, the 414S was well regarded by many.

Its energetic, nimble pit-climbing ability (thanks to a healthy power-to-weight ratio) made it a firm favourite with many seasoned drivers. Its 150hp, six-pot, turbocharged engine was well up to the task of shunting the machine’s 8t about.

Nowadays, JCB’s ‘silage’ loader sales are split between any number of models – including the likes of the 419S Agri, 435S Agri and even the TM320S Agri.

But is the once-fashionable 414S a modern classic? Was it the ‘iconic’ loader for pushing up silage here in Ireland?

In recent decades, the likes of JCB and Volvo (BM/CE) came to dominate the ‘silage’ loader market here; Komatsu was the first veritable ‘newcomer’ to mount a serious challenge to this ‘near-monopoly’.

This happened in the 2000s – a time when ‘silage loaders’ were routinely breaking though the 10t barrier. It was also the era when forks were breaking through the 10ft barrier in ever-greater numbers – prompting the arrival of the now-common ‘folding fork’.

The machine that led the charge for Komatsu was the beefy, 13.5t WA320-5. With 166hp under the hood, this ‘heavy-weight’ was a steady climber; chunky arms enabled it to handle a 14ft-wide fork – without so much as a cough or a splutter! 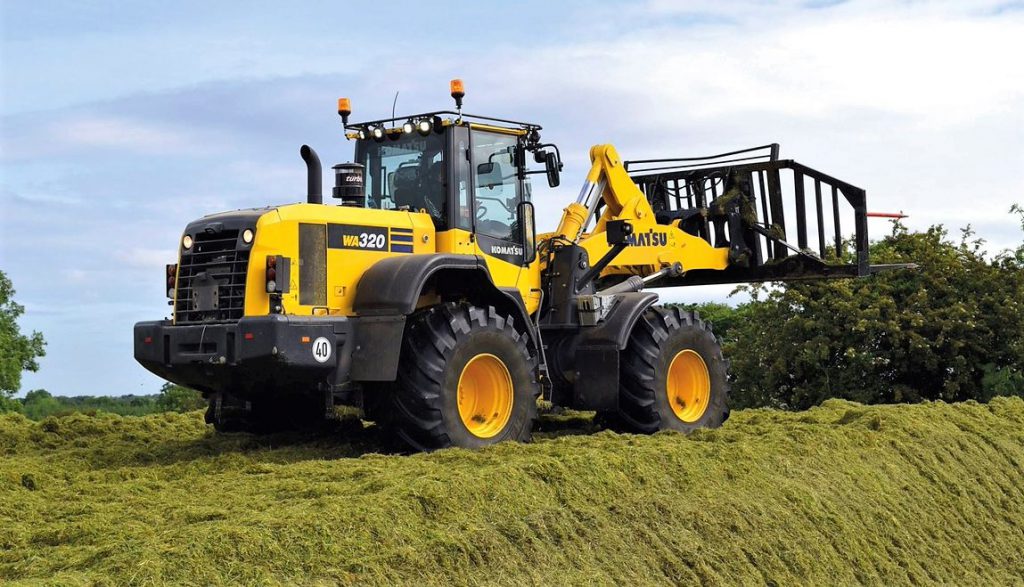 Some contractors moving from torque converter machines had initial worries about the Japanese giant’s hydrostatic transmission; such fears were largely unfounded. 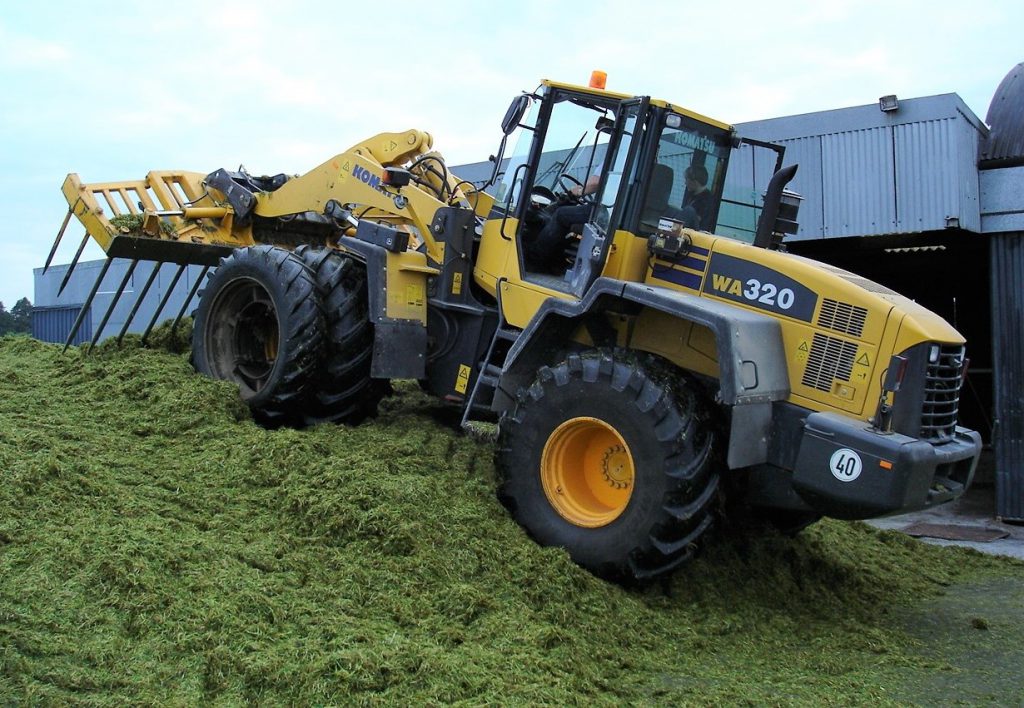 These machines have now clocked up big hours – scaling pits up and down the country. But the question is: Now that the dust has settled, is the Japanese-designed WA320-5 the ultimate, iconic ‘Irish silage loader’?

O&K (Orenstein & Koppel) was a German company that specialised in heavy engineering; its roots go right back to the 1870s.

The O&K brand is familiar to many agricultural contractors here in Ireland, especially in Munster where arguably the biggest population of its loaders was to be found.

Alas, the brand no longer exists; O&K’s construction equipment business was absorbed into New Holland (part of the Fiat Group empire) in 1999. Indeed, some O&K-designed shovels were sold as New Holland badged units for a time thereafter.

Nonetheless, some older O&K loaders are still held in high esteem by a loyal cohort of contractors – and seasoned ‘pit operators’. Models like the L15 and L25 will spark fond memories for some (or traumatic nightmares, depending on how your life aloft a silage pit panned out – amidst the pressure and chaos of a hectic silage campaign).

The first-generation L25 (many incarnations followed) had a distinctly no-nonsense, ‘boxy‘ look; it gave the machine a ‘sense of purpose’. It looked like a loader that meant business!

It was simple to operate; the high-set cab certainly afforded good views out.

O&K shovels of this vintage are getting increasingly scarce now; but an ‘original-of-the-species’ L25 can still turn in a hard day’s graft.

Venieri loading shovels – from Italy – are quite familiar to some agricultural contractors here, but are something of a complete mystery to others.

They first popped up in Ireland courtesy of a distributor in Co. Wexford; they are now imported by a busy Cork-based dealership.

The machines have evolved quite a bit in the intervening years; both internally and externally. Nonetheless, many Irish contractors’ first experience of Venieri was the (VF) 9013.

Notable for its hydrostatic transmission (rather than a torque converter / powershift), it was certainly a breath of fresh air back in the late 1990s and early 2000s.

While having a somewhat cramped (or ‘cosy’ if you prefer) cab and a tendency for chafed hoses (especially around the articulation point), these machines did put in many years of service with contractors dotted about Munster and the south-east.

Does the 9013 – a refreshingly different option in an otherwise unchanging world – top your list of ‘iconic’ silage loaders?

Some might say that we have saved the best ’til last; we would argue that it’s all in alphabetical order!

Last, but not least, is the Volvo BM L70. We’re specifically looking at the first-generation L70 – though we’ll happily accept votes for any early incarnation (L70B, L70C, etc).

Many regard Volvo (now Volvo CE; formerly Volvo BM) as the hard-wearing loader – a heavy-duty machine capable of notching up big hours before major surgery is needed. It’s also regarded as an ‘expensive purchase’ – certainly on ‘day one’.

For several decades, these machines have been busy toiling away – pushing up veritable mountains of grass.

Many, of course, were gainfully employed in sand-pits and quarries – loading 8X4 tippers and articulated dump trucks (which, of course, is largely what the machine’s designers had in mind).

It all started in Sweden in 1832, when Johan Theofron Munktell founded an engineering workshop in Eskilstuna. Meanwhile, in 1844, two Swedish engineers – brothers Jean and Carl Gerhard Bolinder – started a machine shop in Stockholm. The two companies merged in 1932, under the name AB Bolinder-Munktell (later to be known simply as BM).

During the 1930s and 1940s BM produced a range of farm machines, most notably tractors. By 1950, BM had been acquired by Volvo.

Also Read: Video: Where did Volvo loading shovels come from?

By the mid 1970s, the name had changed to Volvo BM. The company then began to concentrate on the development and manufacture of construction machines – such as wheeled loaders.

In 1986, Volvo brought its first ‘L’ series loading shovel to the market – namely the L160. It was quickly followed by other models, including the L70.

1991 saw the arrival of the next-generation ‘L’ series (the B-designated versions), characterised by the distinctive, square-cut Volvo Care Cab and a new lift arm system. These machines were apparently new from the ground up, with a new frame, transmission and axles.

The C-generation machines arrived in the mid 1990s. The rest, as Volvo fanatics would say, is history. 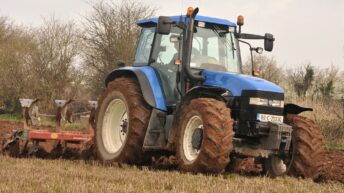