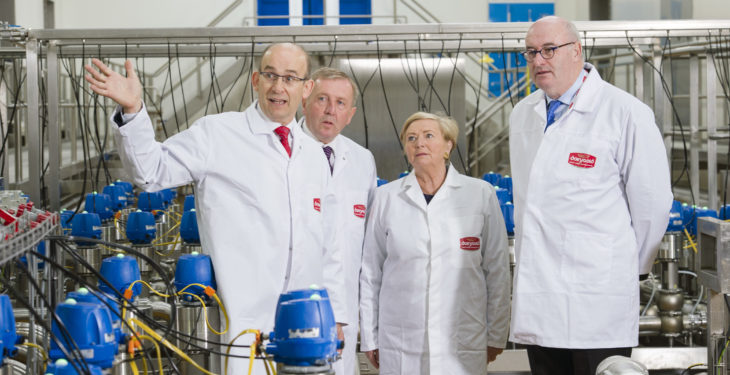 Dairygold has welcomed An Bord Pleanala’s decision to grant permission for the development of state-of-the-art facilities for the manufacture of Jarlsberg cheese in Mogeely, Co. Cork.

The proposal involves a commercial partnership between Dairygold and TINE SA – Norway’s largest farmer-owned dairy co-op and owner of the Jarlsberg cheese brand.

Under the proposal TINE SA will invest in the development; while Dairygold‘s investment in the project will provide a “Brexit-proof” route to market for locally-produced milk.

Dairygold, through its strategic partnership, has been manufacturing Jarlsberg cheese on behalf of TINE SA, in Mogeely for a number of years.

The new dedicated Jarlsberg factory is expected to significantly increase production capacity with a potential to produce up to 20,000t annually.

The cheese produced at the new facility will be exported to Europe, the US and further afield.

Speaking on the announcement, Dairygold CEO Jim Woulfe said: “We’re very pleased that planning has been approved by An Bord Pleanala for the proposed development which is pivotal to the continuation of our strategic partnership with TINE SA.

TINE SA’s commitment to this development and its significant investment, along with Dairygold’s, reflects a strong vote of confidence in the high-quality dairy produce of our members.

Dairygold is currently reviewing the conditions attached to the decision with a view to assessing impact on the proposed development works.

The review will also ensure that the proposed development will comply with the highest standards of planning, operational and environmental regulations.