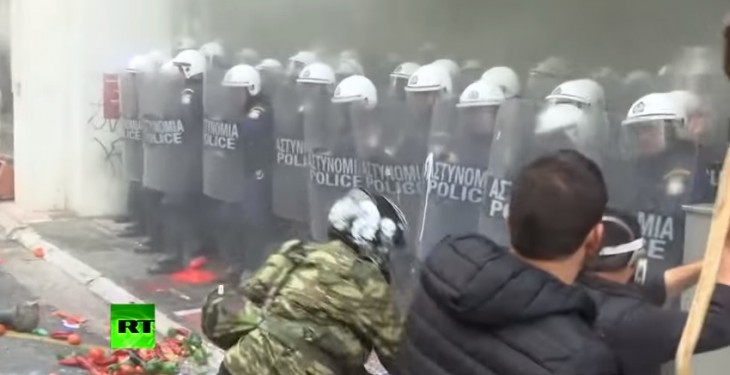 Over 800 farmers are protesting outside the Greek Ministry of Agriculture today after the government there introduced further tax increases and pension austerity measures.

Greek riot police were dispatched to the ministry where they clashed with the protesting farmers.

Pictures surfacing on the internet show that tomatoes and rocks were thrown at the riot police, before things escalated and resulted in the riot police being attacked with shepherd’s crooks.

The riot police responded by throwing tear gas at the farmers.

It has also been reported that the farmers have been blocking highways for the past two weeks ahead of the pension austerity measures.

The measures are being introduced under the terms of Greece’s bail-out.

This video shows ‘masked farmers’ attacking the riot police outside the Greek Agriculture Ministry in Athens. They’re shown hitting the police with shepherd’s crooks and wearing masks against the tear gas.

This picture shows riot police engaging with a protester who has a shepherd’s crook amid the tear gas on the streets of Athens.

The Anadolu Agency tweeted these great photos of the protesting farmers. They show bins on fire and farmers being arrested by the police.

More riot police are shown amid the chaos of the protest, being hit again with sticks and crooks.