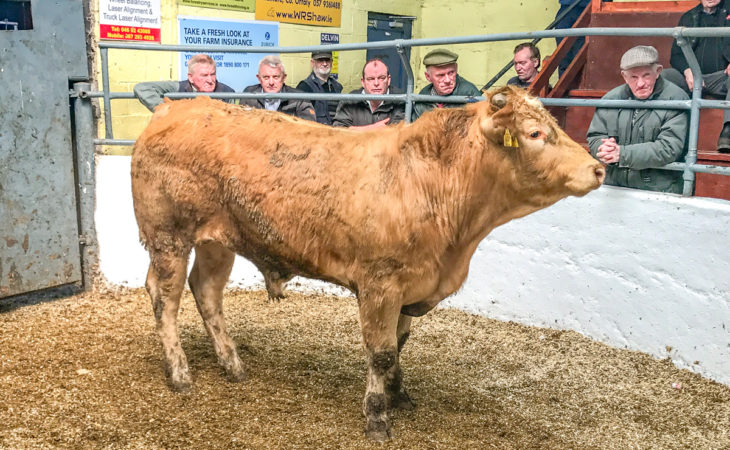 The manager John Gilligan was very happy with the trade and outlined that prices were running €30-40/head dearer than the previous week’s sale.

He said: “Prices have increased right across the board. We had more farmers competing for stock and this helped to boost prices; I can’t see cattle getting any cheaper in the near future.

“The number of cattle presented for sale has also increased. I would expect this to be the case for the next number of weeks and it will probably start to level off towards the mid-May,” he explained.

Touching on the new safety measures implemented in some marts across the country, John added: “We have also changed our system. We now have a ‘viewing period’ where farmers are allowed up the yard to look at cattle.

“After that, the gates will be locked; it’s all in the interest of safety. Nobody wants to see anybody getting hurt. So far, everybody is respecting the new regulations and it’s just a matter of getting patrons used to the idea,” he added.

The trade for bullocks was brisk from start to finish. Store lots sold for €2.04-2.72/kg, while forward store types made €1.92-2.46/kg. A good clearance was achieved and only a handful of animals went unsold.

A number of weanling bulls also went under the hammer at the Westmeath-based venue. These lots met an improved demand and traded for €440-1,380/head.

The cull cow trade was lively from start to finish. Generally speaking, Friesian lots traded for €1.45-1.80/kg, while continental types sold for between €1.65/kg and €2.16/kg.

A number of calves also passed through the ring. Looking at prices, ‘black and white’ bull calves and lots suitable for export traded at €45-100/head. When it came to Friesian bull calves, farmers were willing to pay up to €200/head.

Meanwhile, the lighter, younger calves sold anywhere from €35/head to €60/head. Calves with Jersey genetics generally realised the lower of these prices.

Angus and Hereford bulls traded for up to €275/head. Looking at continental bull calves, a top price of €360/head was achieved by a Charolais calf.