Pics: A selection of photos from Cow Appreciation Day

Cow Appreciation Day was trending today (July 14) on Twitter and we’ve chosen a selection of the many pictures of cows people sent in.

With just over 2m cows in the country, over 1m of which are dairy cows, it’s only right that cows have a day that celebrates all they do for the food chain.

There are over 18,000 farmers in Ireland involved in dairying and their predominantly grass-fed cows produce over five billion litres of milk a year for the country.

However, we can’t forget our cows who are on suckler or beef farms either! Pat Hennessy is so appreciative of his cows he sent us in this great photo: 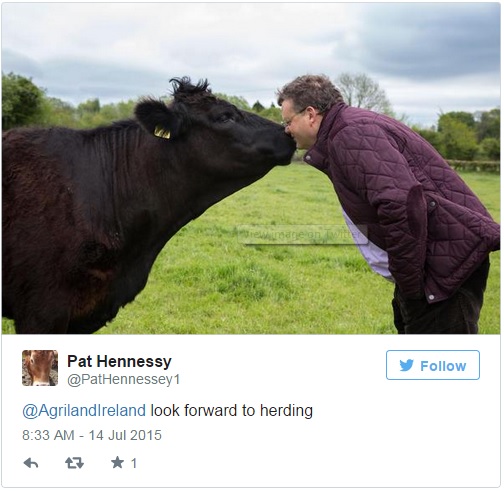 Michael Harding is a Co. Tipperary farmer who is trying his best to turn grass into cash sent in a photo of one of his cows.

A much appreciated cow no doubt! 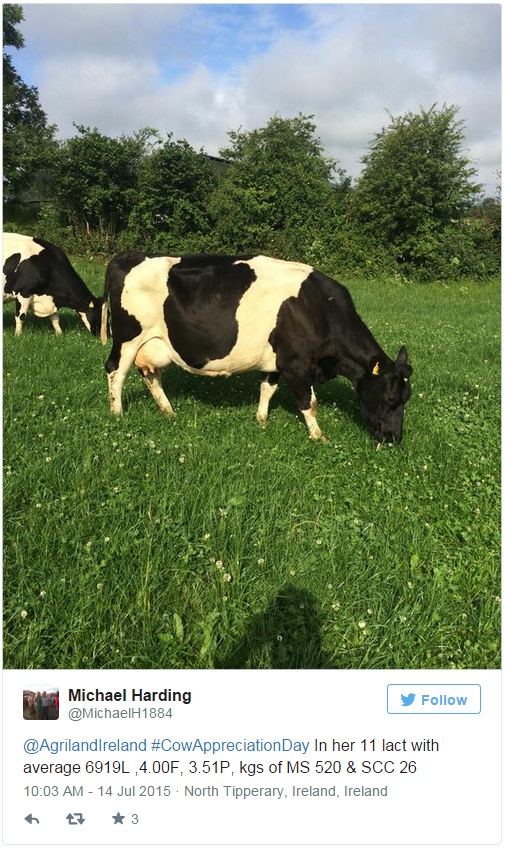 Miriam the cow, who was a major hit at last years National Ploughing Championships was delighted that there was a day dedicated to her and her fellow girls.

Smarter than the average dairy cow from Ireland, Miriam likes grass and nuts and often goes on her holidays to Lely hotels.

Hi @AgrilandIreland about time we were shown some appreciation!!!! #CowAppreciationDay

Cows do a lot more than produce milk and meat for consumption, it’s thanks to them that farmers everywhere have calves every year.

Danielle Bekkering says that cows are cool and cute. She sent us in this photo of one of her cows with her calf. Everyone say aww!

@AgrilandIreland@fi_cooke How nice, cows are cool and cute! What about this couple?! #CowAppreciationDaypic.twitter.com/UqckXB6iQu 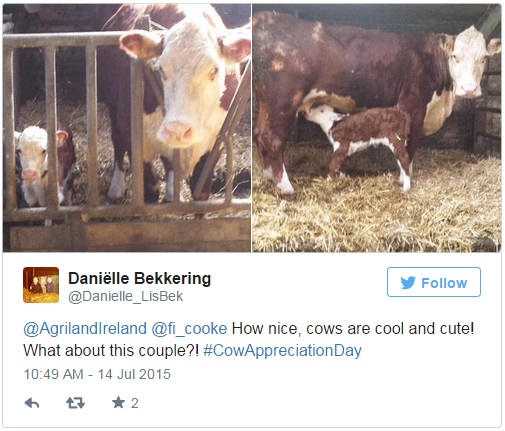 Michael Dunning also appreciates the work put in by cows when it comes to calving. 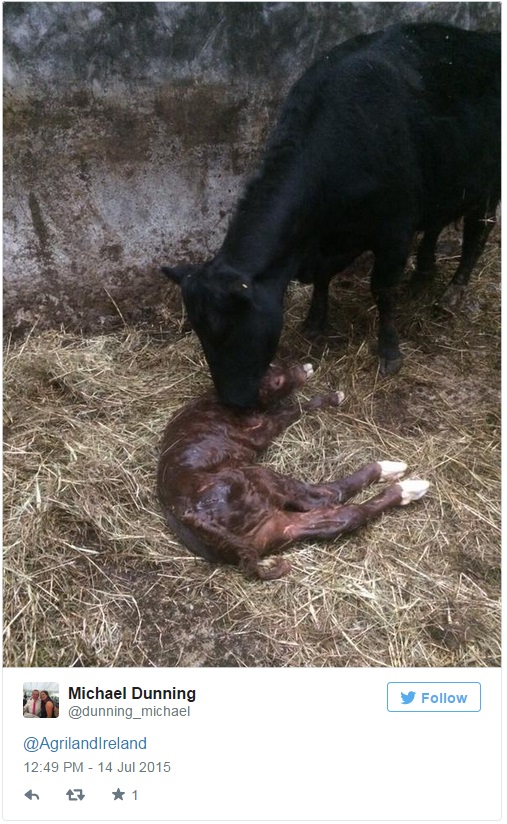 The Derrybrack Aubracs in Co. Mayo were happy out that there was a day dedicated to cows. The farm there is run by father and daughter duo Joseph and Catherina Cunnane. The Aubracs were only too happy to pose for the camera on Cow Appreciation Day. 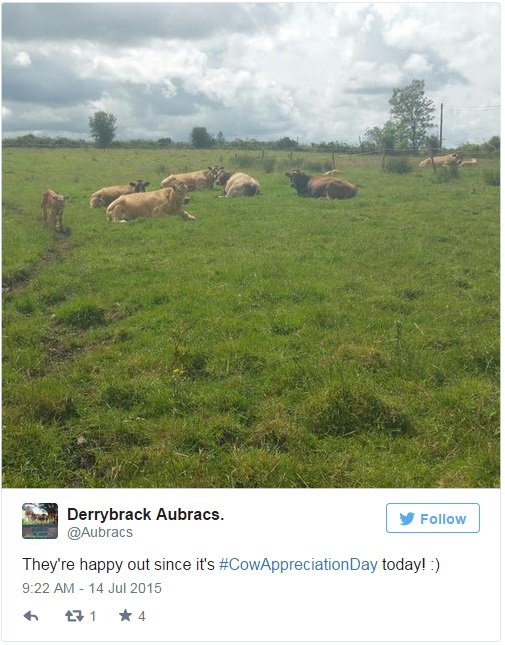 [/yes-app] Catherina Cunnane is also running the Ireland’s Farmers Twitter account this week and she sent in a photo of her favourite cow. She’s a pedigree registered Aubrac sired by RLU and is eight years old. 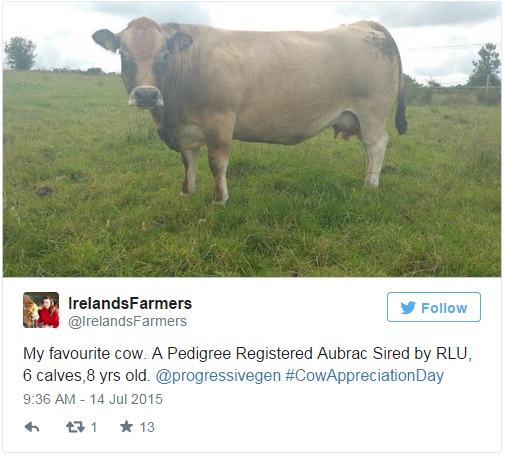 [/yes-app] Glanbia Agribusiness tweeted us a Cow Appreciation Day photo of Chris Miller, Nutrition Expert at Glanbia, at a heifer rearing workshop. Chris got up close and personal with one of the heifers at the workshop! 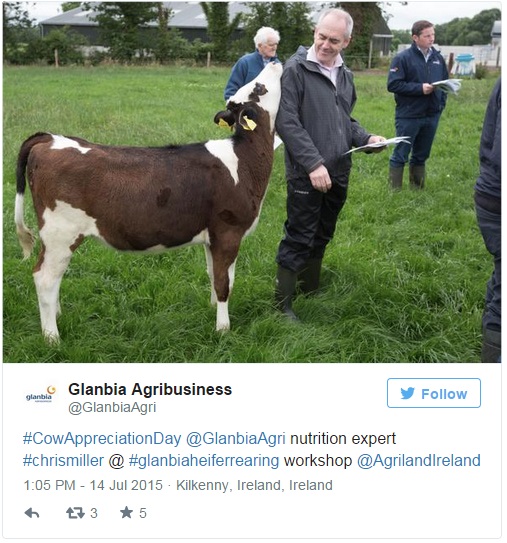 [/yes-app]   Shane McAuliffe, an agricultural graduate and pig producer from Castleisland Co. Kerry, sent in a photo of cows in Grange for Cow Appreciation Day. 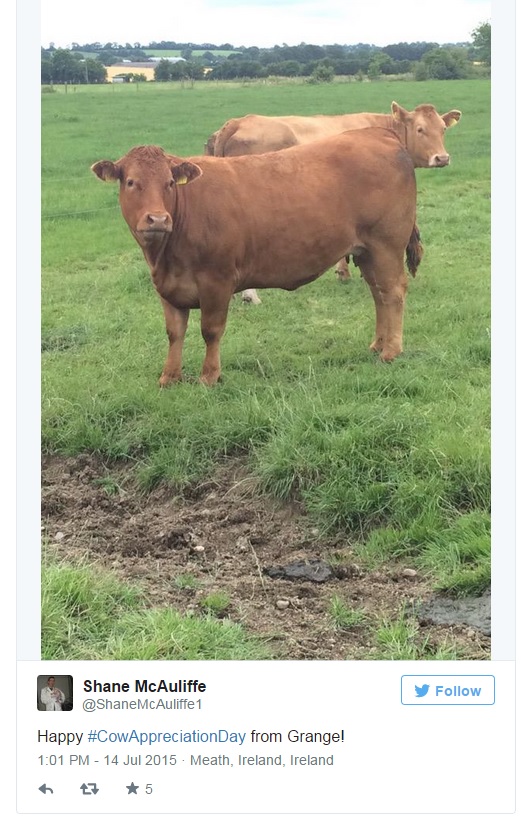 Progressive Genetics sent in a super photo of their oldest cow and a Brookmill Vindicator – VDT heifer calf.

What a fine cow and fierce looking calf! 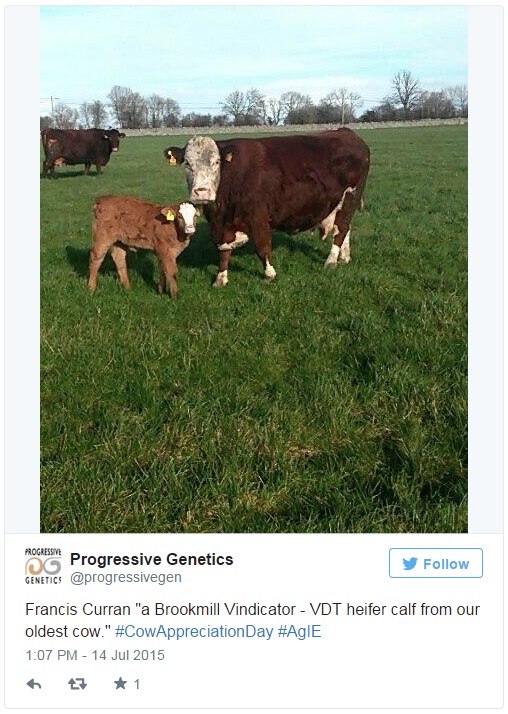 Caroline O’Donovan from Co. Cork sent us in a picture of her herd of cows with the caption ‘they’re a great bunch of lads’. 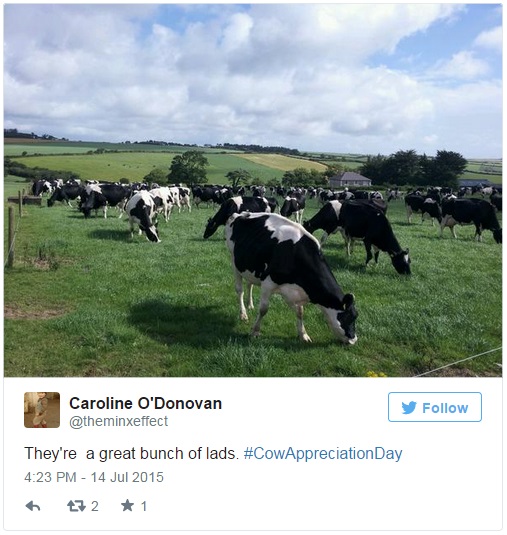