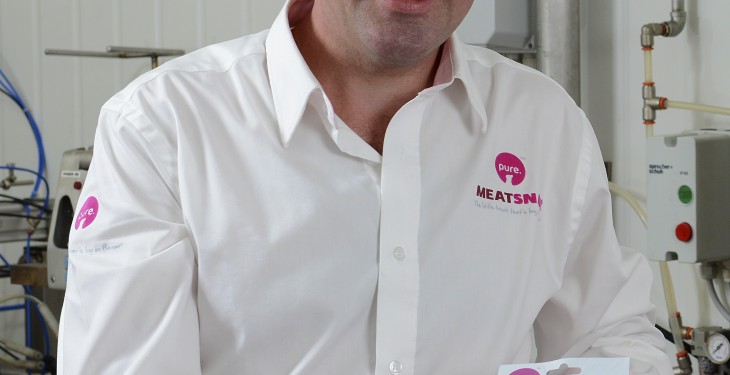 An Irish dog-lover 39-year-old Leonard Greene has turned his passion for canine health into a new business, making nutritional treats for pets.

Greene, who grew up on a family farm in Mullingar, set up his own pet brand ‘Pure’ in December 2010, after losing his job in the construction industry. A farmer and master butcher, Greene quickly put his skills to use and started making 100 per cent Irish beef treats for dogs called ‘MeatSnax’.

He set up a Department of Agriculture-licensed factory in Multyfarnham and following extensive laboratory testing, he’s now selling ‘Pure MeatSnax’ in veterinary clinics throughout the country. He recently started exporting the pet treats to Finland and he plans to break into the Swedish and Norwegian markets over the next 12 months. Back home in Ireland, the product will be available in pet food shops and DIY chains shortly.

A life-long dog lover, Greene has been testing the new treats on his own pets, a two-year old Black Labrador called ‘Sam’ and two Labrador puppies called ‘Cyndi’ and ‘Ziggy’. He said: “I grew up on a family farm, surrounded by pets and animals so I’ve always been very interested in animal health. I saw that there was a gap in the market for an Irish made pet treat which would have more nutritional benefits than other treats on sale. Having worked in the meat industry for a decade, I spent the next ten years working in the engineering world, as a welder and fabricator. Then, when I lost my job during the collapse of the construction industry, I saw my chance to put all my skills together and to turn my passion for canine health into a new business venture.”

The company has been supported by the Westmeath County Enterprise Board, which provided grant assistance towards the cost of machinery and equipment at the plant.

Greene has started working with scientists in NUI Galway, to develop a new range of pet treats with beneficial health properties for dogs. He hopes to tap into the growing ‘health and wellness’ market for pets, by using beneficial natural ingredients, including herbs, for a new range.

With an estimated 27 per cent of households in the European Union* owning at least one dog, there are no shortage of ‘dog-loving’ households, according to Greene. He said: “There’s an estimated 60 million dogs* in the EU alone and as owners know, a dog’s diet is critical to its overall health and well-being. We’re setting out to make more nutritionally-beneficial treats for dogs right here in Ireland, ready to export them to dog lovers around the globe.”

Greene has received interest from distributors in Israel and Spain and he also plans to sell ‘Pure MeatSnax’ direct to pet owners through his website. The seven treat pack retails for €2.99 and is suitable for all breeds.