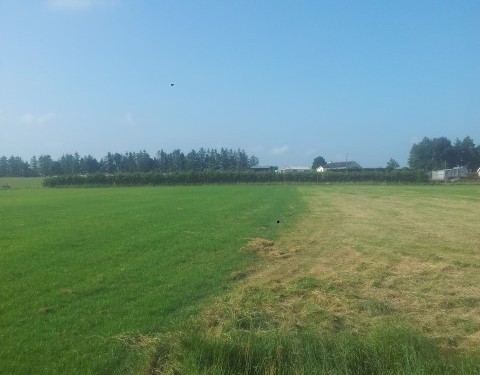 With large swathes of the country still under water, it is appropriate to highlight the research work that is currently under way – involving staff from Aberystwyth University and Rothamsted Research Centre – to develop new grass varieties that are more flood tolerant.

Specifically, the project will assess the feasibility of a forage grass hybrid known as Festulolium in this regard.

Dr Mike Humphreys from Aberystwyth is leading the project.

“Festulolium, which are defined as natural hybrids between ryegrass and fescue species, are very much the grasses for the future. They are the way ahead for sustainable livestock agricultural practices,” he commented.

“Festulolium as a group differ widely in their attributes. However, we have developed options that provide for increased resilience to climate change and more water and nutrient-use efficiency together with several examples of environmental service. Their large well developed root systems combat flooding, reduce soil erosion and compaction and offer opportunities for significant carbon capture and storage at depth in soils.”

The research work to date indicates that grass root-soil interactions involving Festulolium varieties instigate a change in soil structure leading to increased water retention with a prolonged and significant 51 per cent reduction in rainfall run-off compared with equivalent grasses that were grown alongside and that are currently used extensively throughout the UK.

The ongoing project will assess the efficiency and effectiveness of these and other new grasses, both for their agricultural production under a range of alternative livestock management systems and for their flood mitigation properties at different locations and at different scales.

Changes will be made to grass and clover root architecture and growth patterns, and their impact on soil structure and hydrology will be evaluated if reproduced widely at the field scale. If the initial positive findings are replicated on a large scale, this points to a significant breakthrough in flood alleviation.

Professor Phil Murray of Rothamsted Research said: “Trialling these new grasses and clovers at the field scale will allow us to quantify the environmental services that the increased rooting may give. This is especially pertinent at the current time given the extreme rainfall we are seeing, and the downstream flooding problems that are present in large areas of the country. If the grasses behave as we predict then they will be another ‘green engineering’ tool to alleviate flooding.”