The National Dairy Council has sent a memo to its members, on the publication of an anti-milk book, recommending no direct engagement with the debate. 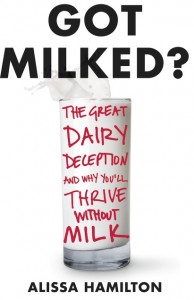 The book, Got Milked? was published in the US recently and is expected to feature in a number of magazines this side of the world.

However, the NDC has contacted its industry colleagues and said “the recommended management approach is not to engage directly with the debate in a proactive and/or reactive manner, as it may be counter productive and potentially feed the anti-dairy activists, causing more traction”.

It its memo, which was seen by Agriland.ie, it goes on to say it is monitoring media coverage of the book which, it says, has been limited to date.

“We are also well-networked and liaising with other organisations on a global level in relation to this book and we have position and rebuttal information to hand should we need to react to any coverage or queries”.

According to the National Dairy Council, the book which plays off the US dairy industry’s ‘got milk?’ campaign contains numerous allegations against dairy foods, dairy promotion, dairy organisations, the USDA, Health Canada and mainstream nutrition and dietetic professionals. It spans nutrition/ health; dairy production and processing methods; and environmental issues.

It has been featured in Oprah Winfrey’s magazine and The Grocer in the UK has indicated that it will run a piece on the book. It is available on Kindle and ibooks and will be available through Easons.

The author, Alissa Hamilton, holds a Ph.D. from the Yale School of Forestry and Environmental Studies and a J.D. from the University of Toronto Law School. She previously came under the spot light following the publication of her earlier book (2009) titled Squeezed: What You Don’t Know about Orange Juice.

The National Dairy Council says its vision is to be the authoritative and trusted voice in advancing the consumer perception and consumption of Irish milk and dairy products.