Moo-ve it: Three cows cause traffic chaos on the M1 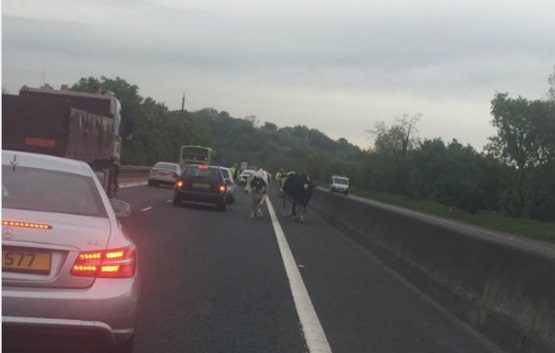 Three cows caused traffic chaos on the M1 in Co. Antrim this morning after they managed to make their way onto the road at rush hour.

Trafficwatch Northern Ireland tweeted that there was three “oul cows” walking on the outside lane, M1 into Belfast just before junction three Blacks Road. They said that they must have missed the bus at Sprucefield Park and Ride.

3 oul cows walkin on the outside lane, M1 into Belfast just before J3 Blacks road. Must have missed the bus at Sprucefield Park and Ride

There was long traffic tailbacks as a result of the Friesians on the road this morning with several people on Twitter tweeting photos of the cows and thoughts of where they were coming from.

John McGinn tweeted this shot of the cows on the M1, going against the traffic.

One Twitter user posted this crafty tweet that the cows were only getting out of the Balmoral Show carpark now.

Another Twitter user said that the cows could have used the park and ride!

The cows received a Police escort back towards Lisburn, the direction they came from, and were safely removed from the M1 to a nearby field.

The Police Service of Northern Ireland (PSNI) is now appealing to the owner of the three cows found wandering on the M1 this morning to contact them on the non emergency number 101.