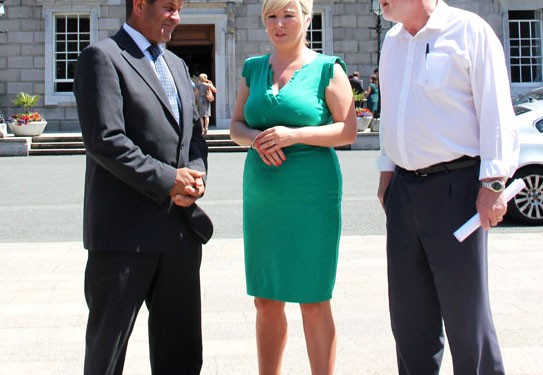 Minister Michelle O’Neill appeared this week before the Dail Oireachtas Committee on Agriculture, Food and the Marine in Dublin and yesterday met with ministers from North and South in Armagh.

The Leinster House visit to the DAFM Joint Committee at the Chairman’s invitation provided the Minister with an opportunity to exchange views on issues of concern across Ireland, in particular, CAP Reform.

Following the meeting with the Oireachtas Committee, the Minister said: “I would like to offer congratulations on a very successful Irish Presidency of the EU which saw agreement reached on the EU Budget, CAP Reform and a number of other matters. The Commission’s original CAP Reform proposals gave rise to similar issues and concerns north and south. We are broadly content with the main elements of the CAP Reform agreement, however we are disappointed in the reduction of the budget. An important achievement from our point of view is the amendment of the greening proposals.

“The initial greening proposals would have placed an extremely high bureaucratic burden on our farmers and reduced the amount of cereal production in mixed farming to the detriment of farmland birds. In the final deal, greening is greatly simplified and more adequately accommodates the needs of our farming sector which is largely based around grassland farming.

“I also welcome the greater flexibility around moving towards a flat rate payment per hectare with the provision of an option to move only part of the way by 2019. This reform of the CAP offers the scope to address a wide range of issues and I was delighted that we were able to secure amendments on and clarification that CAP policy decisions reserved to Member States can be taken at a regional level. We will now be commencing the process to implement that agreement and I am sure there is plenty of scope for further north/south liaison on policy and implementation issues.”

The Minister discussed with the oireachtas committee specific issues including; tackling rural poverty and social isolation, animal health, milk pricing, food security and the recent fodder crisis. Highlighting the work undertaken by DARD to tackle rural poverty, she said: “I am fortunate that as DARD Minister I have the opportunity to help those most disadvantaged living in our rural communities and am delighted that I have been able to secure some £16million from the Executive to help the most vulnerable rural dwellers facing poverty and social isolation.”

Minister O’Neill also took the opportunity to update the Committee on the test and vaccinate or remove (TVR) wildlife intervention research study. The Minister said: “Badgers in the study area will be tested and the test negative badgers will be vaccinated and released. Only test positive badgers will be removed. The preparatory phase for the study is already well underway.”

Yesterday, O’Neill and OFMDFM Junior Minister Jonathan Bell MLA were joined at the meeting in Armagh by Simon Coveney TD, Minister for Agriculture Food and the Marine, and Fergus O’ Dowd TD, Minister of State for the Department of Environment, Community and Local Government.

Speaking after the Armagh meeting, O’Neill said: “We recognise that close collaboration will provide the opportunity to achieve the ultimate aim of free movement of animals on the island.

“We agreed that officials explore the possibility of having an all-island horse passport centralised database. Given the all-island nature of the equine industry it is important that we co-operate on the arrangements we put in place to strengthen the horse passport system and help to prevent food fraud throughout the island.

“We noted that officials have met and agreed the common principles for a proposed All-Island Co-operation strand for inclusion in both of our new Rural Development Programmes. This will allow us to tackle, head-on, issues that have hindered the development of rural communities both north and south for too long.”