Milk production on dairy farms in Northern Ireland rose by 2.8% in May, compared to production figures for the same month in 2016.

This is according to figures recently released by the Department of Agriculture, Environment and Rural Affairs (DAERA).

During the fifth month of this year, the volume of raw milk produced from Northern Irish farms was 229.15 million litres; this compared to 222.81 million litres in the corresponding month last year.

This is the eighth consecutive monthly milk production increase to be recorded in Northern Ireland; figures dropped to a low of 151.72 million litres in September 2016, before continuously rising to their current level.

This was 8.69p/L (10c/L) higher than it was in the same period 12 months ago; prices have remained relatively static all year.

At the end of June, figures from the Central Statistics Office (CSO) showed that milk production on Irish farms this year has continued well ahead of 2016 levels.

During the month of May, production increased by 7.3% compared to the same month last year.

Domestic milk intake by creameries and pasteurisers was estimated at 997 million litres during the fifth month of this year; a rise of 67.4 million litres, the CSO added.

These production figures represent the third consecutive monthly increase on Irish farms in 2017. 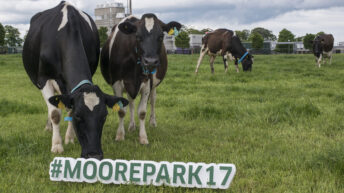