The European Parliament remains concerned that the next EU budget “will be weakened by horse-trading between member states”, Mairead McGuinness has confirmed.

The MEP and First Vice-President of the Parliament, was referring to the EU budget for 2021-27, the Multiannual Financial Framework (MFF), also referenced the importance of agriculture and EU food production.

“While the size of the recovery package remains strong at €750 billion, the figures for the next MFF do not reflect the budgetary needs of existing policies and new ambitions for the long-term.

The parliament has consistently said that a long-term budget lower than the commission proposal is not acceptable.

“And the parliament must vote for any agreement reached – but is prepared to vote against if necessary,” the Midlands-North West MEP warned.

“We support the recovery fund and want to ensure that the money by way of grants and loans go to the regions most affected by Covid-19.”

Continuing, the MEP described as positive “that President Michel maintains the high ambition in this proposal”.

I welcome the provision of a Brexit Reserve of €5 billion to assist those regions and sectors most affected.

This will be vital as countries prepare to weather the impact of the UK leaving the single market and customs union, on top of the COVID-19 crisis.

“But the MFF is about the long-term, about making sure that the EU can match its policy ambitions with sufficient funding”, the MEP underlined.

“The parliament has consistently said that it will not accept a long-term budget that is below what the commission has proposed, so it is disappointing that this proposal reduces the amount of money available.”

McGuinness noted the phased approach to the introduction of new own resources – the EU’s own money – to pay back borrowing for the recovery fund, which includes: a plastic waste levy from January 2021; a carbon border adjustment mechanism and digital level from January 2023; followed by an extension of the Emissions Trading System.

On the detail, McGuinness stressed that the parliament will “carefully study President Michel’s proposals – particularly to ensure commitments on agriculture and cohesion are maintained”.

It is noted that 30% of the proposed MFF is targeted for climate-related spending.

McGuinness added that this week’s comments by German Chancellor Angela Merkel on the importance of agriculture and European food production, including support for farmers, are “particularly welcome at a time when we are concerned about the agriculture budget and increasing demands on farmers around climate ambition and environmental delivery”. 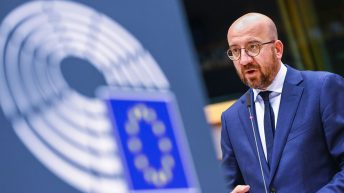