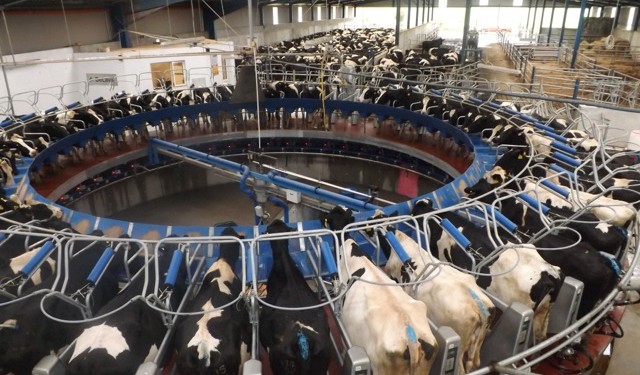 FrieslandCampina has announced a significant drop in its farmgate milk price for December. When calculated for Irish milk constituents, the December prices is a 3.6c/L drop over the November price.

Even though the decline in international milk prices had slowed in November, the overall drop in milk prices since January of this year has been significant.
FrieslandCampina’s farm-gate milk price is down over 28%, while Fonterra prices are back by over 30% since January.

With no short-term upward movement in milk price foreseen, farmers and stakeholder groups should focus to ensure that input cost competitiveness is maximised in 2015. Key dairy input costs are falling. International feed prices and energy prices have fallen by 15% in 2014. International nitrogen fertiliser prices are expected to fall in the first quarter of 2015.

Fonterra – Prices remain unchanged for November, but back almost one-third since January. Total New Zealand Butter, Cheese and Milk Powder export values were 32% lower in October 2014 than they were in October 2013, falling from NZ$1.5 billion to NZ$1.14 billion respectively.

FrieslandCampina – Farm-gate Milk Price dropped by 3.4c/L in December. FrieslandCampina cited the following reasons for the December price reduction; “Global milk supply remains high because of favourable weather and production conditions. On the other hand, the demand for dairy is stagnant and the Russian boycott of EU agricultural products interferes in the market and price setting of dairy products.”

GDT WMP Price – GDT Whole Milk Powder Auctions showed a slight improvement in November, but overall prices are back over 50% since January.

IFCN World Milk Price – The IFCN world milk price remains largely unchanged for October, but back by over 30% since January.

USA Class III – October USA Class III milk prices have fallen back 1.64c/L from their record highs in September. The Butterfat component of this price decreased by over 12% in October, but the Skim component posted a 4.5% increase.

Although milk prices have been falling throughout 2014, so too have the cost of farm inputs. The IFCN October world feed price indicator, which calculates animal feed on the basis of a 30% Soybean and 70% Maize mix, is $22.8 per 100kg. This is 18.9% lower than the January price of $28.1. When calculated in euros this represents a 12.7% drop in price for the first ten months of 2014.

Even though input costs are falling in Ireland, the rate of reduction is much more pronounced internationally.

** Prices listed in the table above show the latest available prices. The FrieslandCampina price is for December. Arla, Fonterra, and GDT prices show November prices. IFCN, Russia, and USA show available October prices. Where possible prices are calculated on the basis of Irish milk constituents of 3.9% butter fat and 3.35% protein.