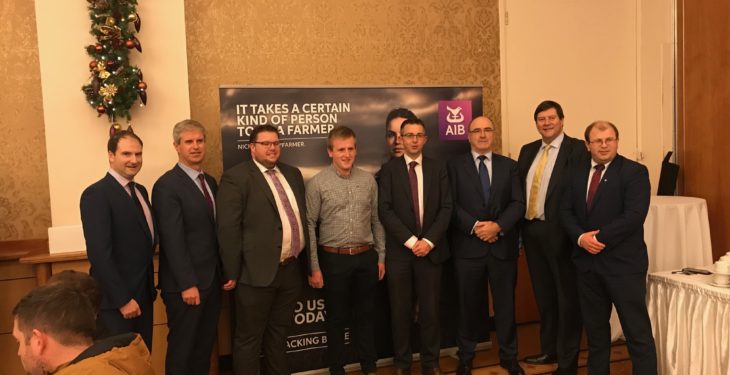 An impressive line-up of speakers took to the stage at the Offaly Macra na Feirme / AIB Agri Talk, which was given the title ‘Ireland: An Island in Global Agri’.

Held in Tullamore, Co. Offaly earlier this evening (Tuesday, December 5), the jointly-run annual event aimed at young farmers is in its second year of existence.

CEO of Lakeland Dairies Michael Hanley; group development manager of Dawn Meats Paul Nolan; AIB agricultural advisor Eamonn O’Reilly; and a young dairy farmer, Willie Neville made up the panel of speakers, with each giving a brief presentation before answering questions from the audience.

Agricultural and rural affairs manager for Macra na Feirme Derry Dillon – who was also elected president of the Agricultural Science Association (ASA) earlier this year – acted as event chair on the night.

Following an opening address given by Macra na Feirme national president James Healy, the presentations by each speaker got underway.

Hanley of Lakeland Dairies noted the importance of exports to the Irish dairy industry, as shown by Lakeland’s. Hanley was not unduly concerned with the impact of Brexit, noting that the processor exported to 80 different countries, with markets in the Middle East, Asia and Africa expected to expand. China in particular is earmarked for further potential, the chief executive added.

Hanley also outlined that half of Lakeland’s suppliers and operations were in the North and the other half was in the Republic.

Advertisement
Through the use of ‘inward processing relief’ (IPR), which allows produce to be brought across the border, processed and brought back out tariff-free – so long as the product returns to where it originated – the company should escape the worst effects of Brexit, he added.

Meanwhile, Paul Nolan of Dawn Meats underlined the influence of dairy breeds on Irish beef carcasses currently – adding that while the suckler cow population has reduced below the million mark, the dairy cow population has skyrocketed up to over 1.4 million; despite both cattle populations having been almost on par up to four years ago.

Nolan underlined the importance of grass, referring to it as “Ireland’s greatest natural asset”.

Following on from this, Willie Neville gave an account of his farm expansion. In partnership with his parents, Neville aimed to maximise his business by going from 90 Holstein Friesian cows up to 220 – with an optimal herd target in place of 240 cows.

The farmer operates a zero-grazing system and outlined his best-practice procedures to get the best results, including grassland management, good grass utilisation, dosing, mastitis treatment and hoof care among other practices.

AIB’s Eamon O’Reilly gave the audience an insight into farm business from the bank’s perspective, covering what you need to have prepared should you be seeking a bank loan as well as noting the different aspects that must be taken into account.

AIB recognised this, O’Reilly said, and supported the Teagasc Grass 10 campaign. Following the presentations, questions were taken from the floor on a variety of aspects of Irish agriculture.