Lemken ploughs up with Kildalton 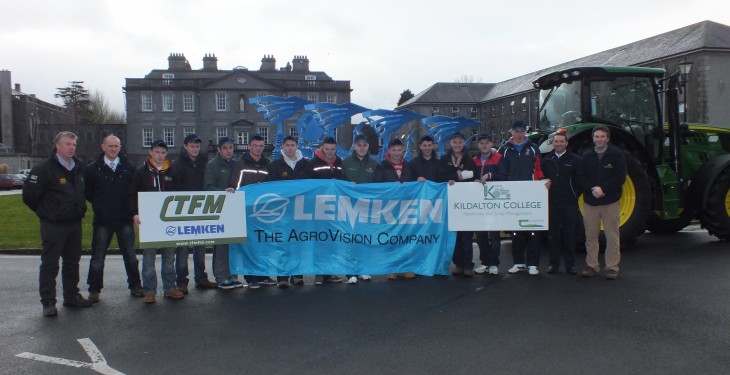 Following on from a successful programme last year, Lemken along with TFM, are very proud to launch for the second-year running, the Lemken plough programme to machinery and crops students at Kildalton College in Piltown Co Kilkenny.

Lemken a well-known German manufacturer of crop cultivation equipment have placed a four-furrow EurOpal 7X plough into Kildalton College to allow the students use during coming college year. With constant information and education direct from LEMKEN specialists, the students will gain valuable knowledge in correct plough setting, procedures and practise and how to gain the maximum from ploughing in terms of productivity and profitability.

According to Diarmuid Claridge of Lemken: “Soil is the most valuable asset on any farm and treating it correctly is vital. Correct plough settings are key to maintaining soil structure, drainage and weed control.”

The plough will be available for each student to use throughout the season, allowing him/her to see the benefit’s of the Lemken plough and its systems to reduce fuel usage, wheel slip and metal wear by using its true alignment.

Claridge noted the hard-wearing DuraMaxx plough body will also be demonstrated during the season to show the students the cost savings available through this unique design. Up to 75 per cent more hectares can be gained from using DuraMaxx bodies.

At the end of the spring season, each students will compete against each other in a plough test/match where their knowledge of ploughing, in terms of safety, correct settings and procedures will be put to the test. The winner will receive an all-expenses paid trip to the LEMKEN factory in Germany, a Waterford Crystal Trophy and the title of LEMKEN Plough Operator Of The Year.